We have a very interesting week ahead of us, with several important data having the potential to reshape investors’ views on the financial markets. Among them are the Chinese PMIs, Australia’s GDP, and the Canadian GDP.

But even more crucial may be the Eurozone CPIs and the US employment report, as they can add credence or contradict market expectations regarding the future course of monetary policy from the ECB and the Fed. We also have a BoC decision, with expectations pointing to another 50bps hike.

On Monday, the calendar appears light, with the US markets being closed in celebration of Memorial Day. The only release worth mentioning is the preliminary German CPIs for May. The rate is forecast to have increased to +7.6% YoY from +7.4%, while the is anticipated to have risen to +8.0% YoY from +7.8%. Although not major market movers, the German rates could raise speculation that Euro-area inflation data, due out on Tuesday, may also reveal further acceleration.

On Tuesday, during the Asian session, the spotlight is likely to fall on the official Chinese PMIs for May. No forecast is available for the and indices, while the one is anticipated to have increased but to have remained within the below-50 territory. Specifically, it is expected to rise to 48.0 from 47.4. If the other two indices follow suit and stay below 50, this will be the second month in a row where the PMIs point to contraction.

In our view, this will suggest that the zero-Covid policy of China continues to hurt the economy severely. Thus, we may see market participants abandoning equities and some of the risk-linked currencies as well, like the .

Due to its very close trade ties with China, the Australian economy is well affected by developments surrounding the Chinese one. Thus, the data may spark concerns that the RBA may eventually not hike interest rates as many times as it is currently priced in.

According to the ASX 30-day interbank cash rate futures yield curve, market participants are pricing in nearly 9 more quarter-point hikes by the end of the year. Thus, we see ample room for disappointment and a slide in the Australian currency. 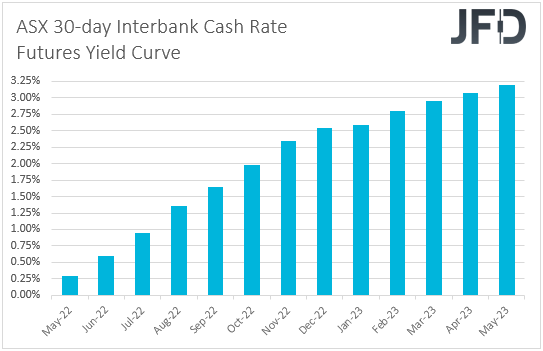 Later in the day, we get the preliminary inflation data from the Eurozone during European trading. The is expected to have risen to +7.7% YoY from +7.4%, but the is forecast to have ticked down to +3.8% YoY from +3.9%. 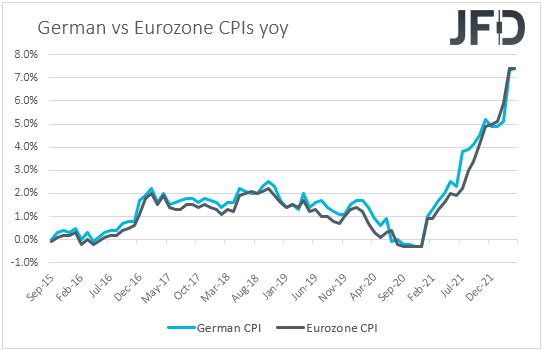 Last week, ECB President Christine Lagarde said that the ECB is likely to take its deposit interest rate out of the negative territory by the end of September and could lift it further if needed. Given that the deposit rate is at -0.50%, we believe that this means two quarter-point liftoffs, one in July and one in September, and actually, some other ECB officials also supported that view.

So, we believe that accelerating inflation could add more credence to the case with that in mind. Still, for market participants to start speculating that this Bank could deliver something more, we would like to see underlying inflation accelerating.

Yes, the could continue gaining a bit more against its US counterpart, but we are reluctant to call for a longer-term trend reversal. After all, the Fed is still expected to continue hiking at a faster pace than the ECB, and even if participants see the ECB accelerating its process, we doubt that Euro area policymakers will adopt a path similar to that of the Fed. After all, the US economy is in a better shape than the Eurozone, which allows Fed officials to keep delivering double hikes, despite some fears over a slowdown recently.

Canada’s GDP for Q1 is also on Tuesday’s agenda. The rate is forecast to have declined to +5.4% from +6.7%, but to be honest, we doubt that this could derail BoC officials from delivering a 50bps hike when they meet on Wednesday.

After all, the data refer to the first quarter of the year, and we are already well in the second. The BoC itself appeared very optimistic at its latest gathering, which was held on Apr. 13, still after the first quarter was over. On top of that, monthly data concerning months of the second quarter justify the case for another double hike. The slid further, while inflation kept accelerating in both headline and core terms. 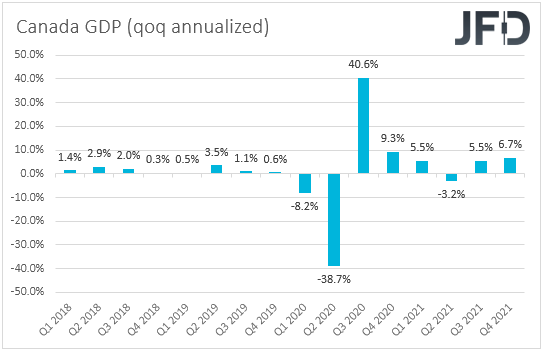 Yes, we are already into the second quarter. Yes, the RBA sounded relatively hawkish at its latest gathering, but a disappointment in Australia’s data, especially after weak Chinese PMIs, could weigh on the Aussie. As we already noted, this may be because market participants remain extremely hawkish on their future rate hike bets. So, more disappointing data could result in a reality check, meaning some more AUD selling. 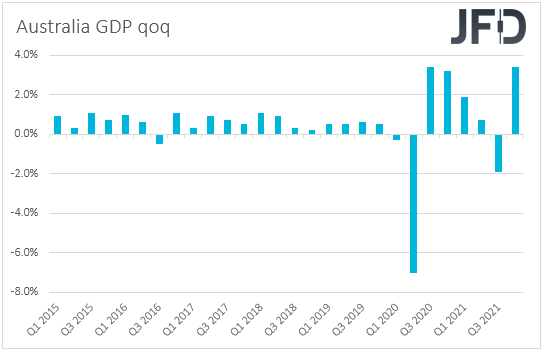 Later in the day, we have the , with expectations pointing to another double hike. Thus, if indeed this is the case, we believe that investors will quickly turn their attention to the accompanying statement for clues and hints as to how this Bank is planning to move forward. 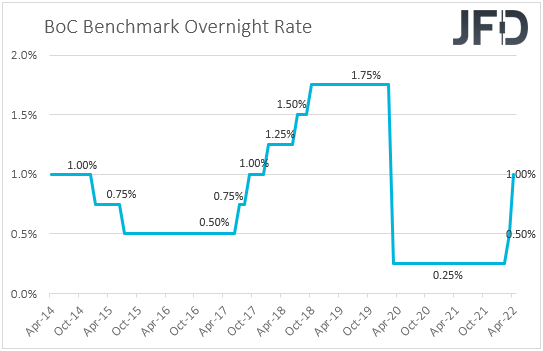 Last time, officials of the BoC decided to hike rates by 50bps as was expected, noting that interest rates will need to rise further. Governor Macklem specifically said,

“We need higher rates, and the economy can handle them.”

He added that they are prepared to move as forcefully as needed to get inflation on target. With data since then keeping adding credence to that view, we believe that policymakers will maintain a hawkish language, which could support further the Canadian dollar.

From the US, we get the for May, with the forecast pointing to a slide to 54.5 from 55.4. This could confirm somewhat worries over a slowdown in the US economy and perhaps increase, to some extent, speculation over a potential pause by the Fed after the summer.

Remember that in the minutes of the latest FOMC gathering, it was noted that several officials said data had begun to indicate that inflation may no longer be worsening. However, a more determinant data set over whether participants should be awaiting a policy break after summer may be the US employment report for May, due to be released on Friday.

On Thursday, we will get a first taste of how the US labor market has fared when the for the month is coming out. Though not a major market mover and not a perfect gauge of the nonfarm payrolls, it is the best we have.

Expectations are for the private sector to have added 280k jobs during the month after adding 247k in May. This is positive, and although the forecast for Friday’s NFPs is for a slowdown, the actual figure is expected at 320k, which in our view, taking into account the continuous tightening of the US labor market, is still a decent number.

As for the data, we get some final PMIs, which are expected to confirm their preliminary estimates, as well as Eurozone’s for April. However, the only top-tier release we have on the agenda is the US employment report for May. 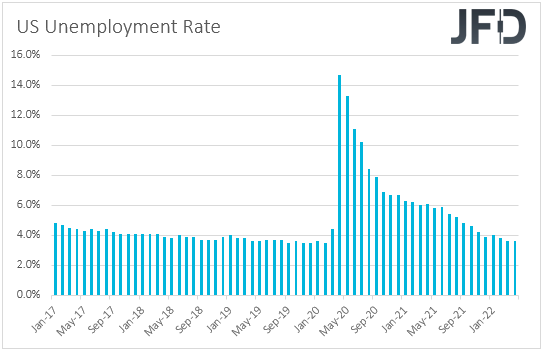 In our view, this is a very good report. Despite a slowdown, adding 320k jobs when the unemployment rate is falling to 3.5% is nothing but positive. However, wages are expected to slow may add some validity to the view that inflation is not expected to worsen.

Overall, we believe that such numbers are a double-edged sword. On the one hand, the positive jobs growth and unemployment rate numbers could ease fears over a potential slowdown, thereby allowing some dollar buying. The Fed could continue tightening without fear of causing a recession.

On the other hand, slowing wages on a YoY basis could prompt some to sell as they become more convinced that the Fed will take a break after summer. Our view is that the former group may prevail, as it is too early to say with certainty that inflation will not accelerate again.

After all, in the of the latest FOMC gathering, it was also revealed that policymakers agreed that it is too early to be confident that has already peaked.