• Consumer earnings, data could be catalysts for broader market
• The real story is the Fed
• Worst yield inversion in 40 years
• Reevaluation of the trend

There is an argument to be made for trading activity to subside in the upcoming week. I have also noticed something I missed in technical analysis, and I am therefore revaluating my expectations accordingly.

Investors are awaiting a catalyst ahead of the most important shopping season of the year, even as traders have grown accustomed to the Thanksgiving holiday week being one of the quietest of the year. However, my Spidey sense is tingling, making me think this is the calm before the storm.

The yield curve – the interest rate of contract maturity spectrum – has been inverted since July. This is a bond market that is upside down. In a healthy environment, traders would demand to be paid a higher yield the longer they had to wait to get their money back. In ours, they are willing to pay (with a lower yield) for safety against what’s coming. Short-term rates spike as bond investors reroute into longer-maturity issues – which indicates that investors expect the Fed, after falling asleep at the wheel, to keep hitting the iron while inflation is hot.

The yield is at its most inverted since 1981-1982. Although a yield-curve inversion is the single most reliable indicator of a recession, it doesn’t tell you when, how long, or how deep. Investors knew for years about the bubble that led to the 2008 crash – and, indeed, the legendary short trader depicted in The Big Short film had been shorting the housing market since 2005. In other words, although investors may think we’re heading for a recession, it doesn’t necessarily mean they want to sit on the sidelines until it happens. So, stocks could rise even as people expect a recession.

Let’s look at another indicator, the . 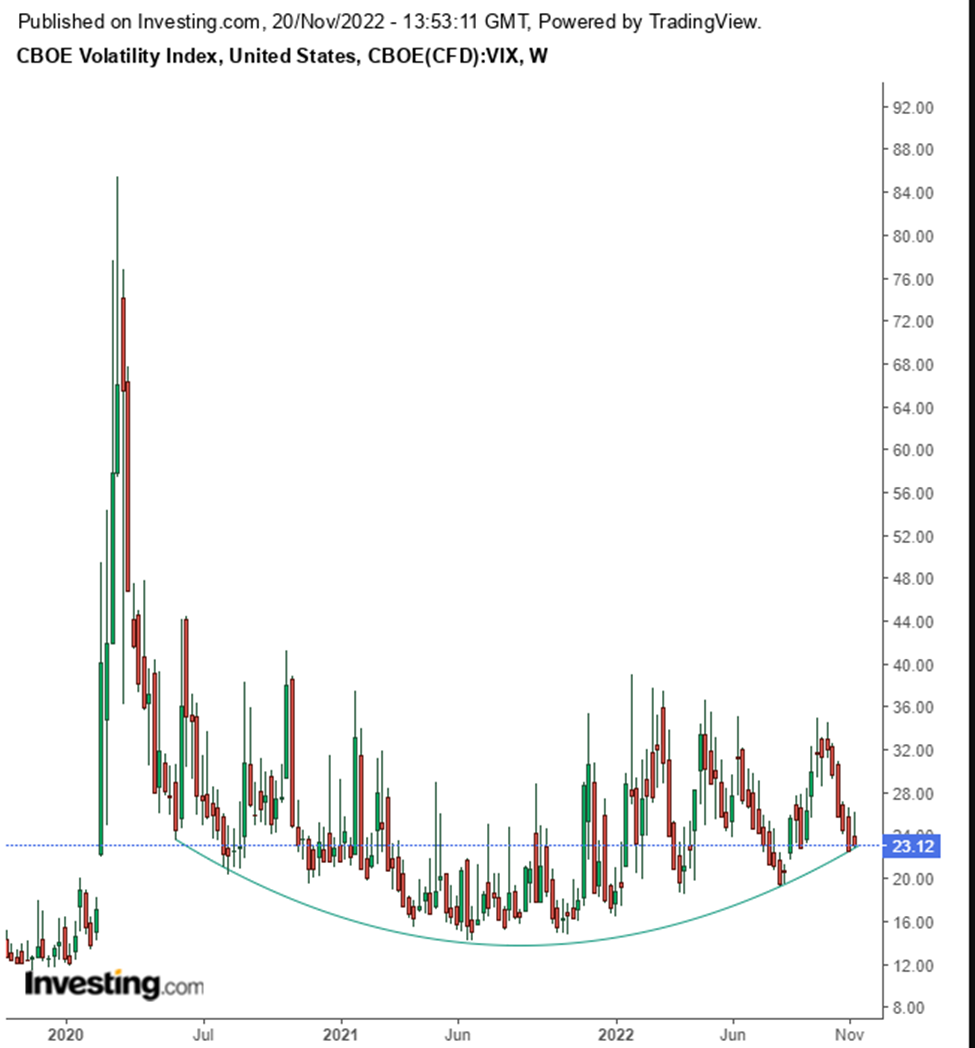 The contract paused last week at the bottom of its rounding pattern in June 2020. Will the VIX spike up again, suggesting a continued medium-term equity selloff?

This brings me to a technical event I had missed till now. I have been telling you that the market is in a downtrend in the medium term, as the succession of peaks and troughs are descending. However, today I noticed that I missed one peak. Trendlines and peaks and troughs are the bread and butter of technical analysis. With today’s endless sophisticated mathematical formulae, which technicians produce at a press of a button, many do not correctly assess the supply and demand projected by the price action (and confirmed by volume). Even though I pride myself as a minimalist, not letting the noise interfere with the primary direction, I am embarrassed to admit that I missed a beat.

I went over all four leading U.S. indices, and they all have the same phenomenon, but I’ll highlight the as the archetype: 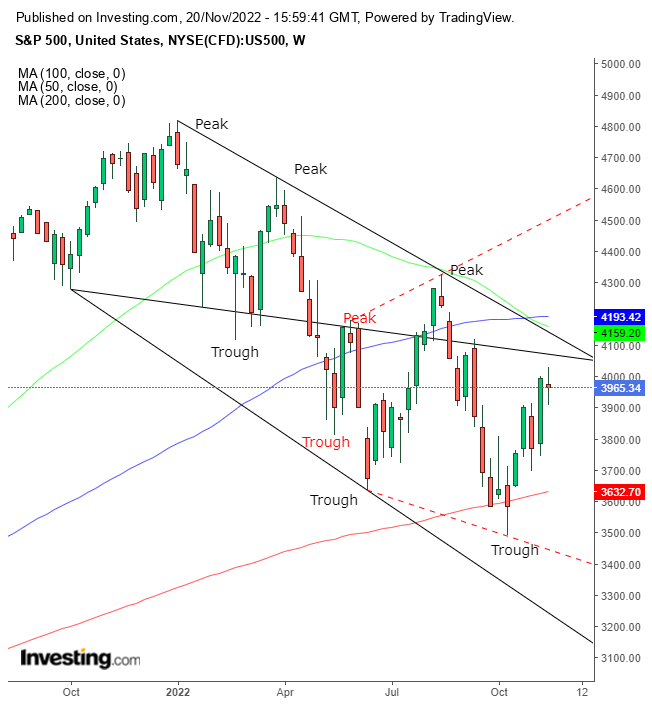 I have missed the May trough and peak in my analysis (marked in red). Today, I measured them and found that the mid-to-late-May advance retraced more than one-third of the late-March-to-mid-May decline and, therefore, this should be calculated as a bonafide peak-and-trough. Having included this, we no longer have a consistently descending series of peaks and troughs, as the mid-August height overcomes the late-May high.

Still, in October the price fell below the mid-June low. So, we now have a sideways or trendless move in the medium term, and this could develop into a Head-and-Shoulders Continuation Pattern. I’m still bearish because the index (as well as the other gauges) has not reversed with a rising set of highs and lows, but I’m not as adamant on this as I had previously been. If the price registers a new low, which I think is likely, it will reconfirm the downtrend. However, if the price trends are above the mid-August high, we’ll have to begin considering that a bull market may be on the way.

How does this jibe with my earlier assertion that we are heading toward a recession? Investors don’t want to be left out of bargain hunting, and they are playing chicken with the economic downturn, just as they did in the mid-to-late 2000s.

Investors could be looking to take advantage of cheap consumer stocks. The consumer discretionary sector is down 31.04% for the year, better only than the 36.24% drop in the worst sector – communication services.

On Monday, Dell Technologies (NYSE:) releases earnings. Best Buy (NYSE:), American Eagle (NYSE:), Burlington (NYSE:), Dollar Tree (NASDAQ:), and Dick’s Sporting Goods (NYSE:) release earnings on Tuesday. After a week of mixed performance, traders could jump into and out of those stocks and the entire sector on any surprises.

Investors will look for consumer-related data on Wednesday, with and for manufacturing and services. Later, traders will keep track of any feedback on consumer spending over Black Friday.

But I think the real catalyst is the Fed. So far, policymakers have said they are willing to risk a recession to achieve sustainable pricing. Any Fedspeak or data will convince investors the Fed may ease tightening, which will almost certainly boost stocks.

Disclosure: At the time of publication, the author had no positions in the securities mentioned.

Looking to get up to speed on your next idea? With InvestingPro+ you can find

And a lot more. Get all the key data fast so you can make an informed decision, with InvestingPro+. Learn More »

Snap employees to work from office starting February By…

Bonds are (sort of) back