The traded higher against most of the other major currencies yesterday and today in Asia. At the same time, Wall Street slid yesterday, with the negative appetite rolling into the Asian session today. This may have been because slowed less than expected, adding credence to the view that the FOMC will stay among the most hawkish, if not the most hawkish major central bank.

USD Gains, Stocks Slide, as US Inflation Slows by Less than Expected

The US dollar traded higher against most of the other major currencies yesterday and today in Asia. It gained notably against , , and , while it eked out fewer gains versus , , and . The only currency against which the greenback slid was .

The strengthening of the US dollar and the yen, combined with the weakening of the risk-linked Aussie and Kiwi suggests that investors’ appetite deteriorated at some point yesterday or today in Asia. Indeed, looking at the performance of the equity world, we see that European shares gained. Still, Wall Street came under selling interest, with the selling rolling over into the Asian session today. 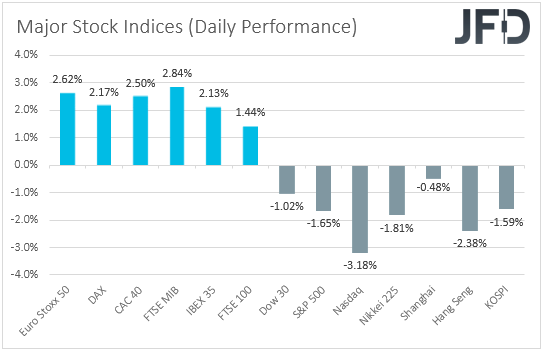 Like yesterday, we believe that the further recovery in European equities was due to bargain hunters trying to take advantage of the lower prices. We stick to our guns that the fundamentals suggest that there is still more room to the downside, and that view was enhanced after the US CPIs came in above their forecasts, forcing US investors to sell stocks.

Although inflation still slowed, it came in above its forecasts adding credence to the view that the Fed may need to continue tightening at a fast pace. Yes, investors did not bring back bets regarding a 75bps hike at one of the upcoming gatherings, but they remained convinced that 50bps increments are well on the table.

According to the CME FedWatch tool, two 50bps hikes for June and July are fully priced in. This suggests that the Fed remains among the most, if not the most hawkish major central bank, and that’s why we expect the greenback to extend its prevailing uptrend for a while more.

We do expect it to outperform currencies the central banks of which are expected to proceed with tightening at a much slower pace or stay ultra-loose, like the BoJ. The BoJ stance was highlighted and confirmed again by the from the latest meeting, released overnight.

However, with worries and concerns over global growth increasing recently, we see the case for the yen to continue receiving some support due to its safe-haven status. And with the risk-linked currencies Aussie and Kiwi feeling the heat of risk aversion, we believe that and may slide more, regardless of monetary policy.

Even USD/JPY, which we expect to rebound and keep drifting north, could see a small setback. However, due to both the dollar and the yen acting as safe havens, we believe that monetary policy divergence will be the main driver.

As for exploiting further USD strength, we believe it would be better to do it against EUR and GBP because both the ECB and the BoE are expected to proceed relatively slowly in tightening. Today, we got the first estimate of the , which came in below estimates, and the business investment for the quarter, which contracted.

In our view, this adds to the risks of a recession next year and adds to the narrative that the BoE may slow down its hiking process. The greenback could also keep outperforming the Aussie and the Kiwi, now vulnerable due to global growth concerns.

The cash index traded lower yesterday, breaking below the 12175 zone and extending its prevailing downtrend marked by the downside line drawn from the high of Apr. 5. The fact that the index remains below that line and also below all three of our moving averages on the 4-hour chart keeps the short-term picture negative, in our view.

To start examining the bullish case, we would like to see a clear break above 13745, marked by the inside swing low of Apr. 18. The index will already be above the downside resistance line taken from the high of Apr. 5, and we may see advances towards 14285 or 14620, resistances marked by the highs of Apr. 21 and 8, respectively. Another break above 14620, could carry larger bullish implications, perhaps paving the way towards the 15175 zone, near the highs of Apr. 4 and 5.

AUD/USD edged south yesterday, breaking below the 0.6930 zone, which provided support on May 10 and 11. This, combined with the fact that the pair is trading well below the downside resistance line drawn from the high of Apr. 5, paints a negative near-term picture.

We expect the bears to stay in the driver’s seat and perhaps aim for the 0.6835 barrier soon, marked by the low of Jun. 30, 2020. A break lower could invite more sellers into the game and perhaps push the action down to the 0.6690 area, defined as a support by the inside swing high of May 29.

On the upside, we would like to see a clear break above 0.7280 before assessing a bullish reversal. The rate will already be above the pre-mentioned downside line, with the next stop being the 0.7345 zone, marked by the low of Apr. 19. A higher break could encourage advances towards the 0.7458 or 0.7493 zones, whereas another break could extend the gains towards the 0.7593 zone, marked by the high of Apr. 6.