We have a relatively light week ahead of us in terms of economic data releases, with the most important ones being the for April and the preliminary , both of which could reshape market expectations about the plans of the Fed and the BoE.

We will also pay extra attention to the German ZEW survey for May and the Summary of Opinions from the latest BoJ gathering. On the geopolitical front, investors may closely monitor a speech by Russian President Putin, who will speak at the “Victory Day” celebrations.

Monday is a relatively light day in terms of scheduled economic releases. However, that doesn’t mean that market participants will stay calm and relaxed. In our view, they will stay on the edge of their seats in anticipation of what Russian President Vladimir Putin has to say during his speech at the “Victory Day” celebrations.

There was already speculation that he might declare war on Ukraine so that he could call up reserve troops, and the new energy bans from Europe over the weekend may have added to that. Remember that up until now, Russia calls the invasion of Ukraine a “special military operation”.

We believe that something like that could hurt market sentiment, sending equity indices even lower and intensifying fears over World War III. Even yesterday, Chairman of Russia’s State Duma Viacheslav Volodin warned US Pr. Joe Biden that the alternative to the sanctions imposed on Russia would be a World War.

Now, in case there is not such aggressive rhetoric by Putin today, stocks and other risk-linked assets may experience a relief bounce. However, we will maintain a bearish stance about the bigger picture, as expectations of aggressive tightening by the Fed and some other major central banks may keep stocks pressured.

The calendar for the rest of the week remains relatively light on economic data. Still, we will get to hear from several central bank officials, including ECB President Christine , BoE MPC member Michael , and several critical regional Fed Presidents and Governors.

With monetary policy on the front page of investors’ agendas, it will be interesting to hear what they have to say about the plans of their Banks. On Tuesday, the release on which we will place extra emphasis, despite not being a major market mover, is the German ZEW survey for May.

Both the and indices are forecast to have slid further into the negative territory, intensifying concerns over the performance of the German economy and the Euro area as a whole, which could also prompt participants to scale back their bets over a summer rate hike by the ECB.

If so, is likely to drift lower, especially against the all-mighty greenback, with EUR/USD perhaps falling below the key support zone of 1.0470/90 and entering territories last seen in January 2017. 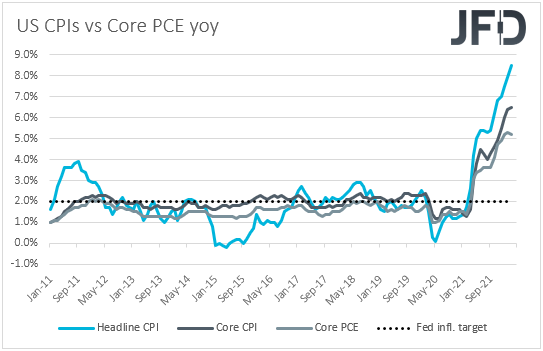 At its , the FOMC decided to lift interest rates by 50 bps as was widely anticipated. Still, Fed Chair Jerome Powell downplayed the chances for a 75 bps hike in June, saying that 50 bps hikes should be on the table at the next couple of meetings.

This resulted in a slide in the , but that was a one-day story, with the greenback making a comeback as market participants re-evaluated the situation and brought back to the table their triple hike bets. Futures markets are now pricing at around a 75% chance for such a move, and an upside surprise in the CPIs could lift that number higher and add further fuel to the dollar’s uptrend.

If inflation slows, and even more than expected, the greenback could pull back. Nonetheless, both the CPI rates may stay well above the Fed’s objective of 2%, which could keep the rhetoric around the Committee’s future course of action ultra-hawkish, and the broader USD uptrend intact. As we already noted, we will get to hear from several Fed officials this week, and thus, we may have a clearer picture of their thinking by the end of the week.

As for the rest of Wednesday’s events, during the Asian session, China released its inflation numbers, with the expected to have slowed to +7.7% YoY from +8.3%, but the could inch up to +1.8% YoY from +1.5%. A few hours later, during the European trading, we have Germany’s final , with the final numbers expected to confirm their preliminary estimates.

On Thursday, the spotlight is likely to turn to the first estimate of the UK GDP for Q1. Alongside that figure, we get the numbers for the quarter, the and rates for March, as well as the trade balance for the month. 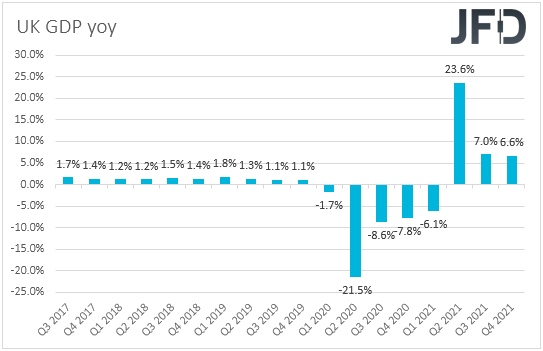 Remember that the BoE hiked by 25 bps as was widely anticipated last week but warned over recession risks, projecting a contraction for next year. Thus, a 1.0% growth rate and a higher YoY one could ease concerns over a UK recession.

However, bearing in mind that we are already well into the second quarter and that the Bank’s projections were for next year, we believe that market participants will remain cautious about the BoE’s future course of action. Due to high , the Bank is likely to continue lifting interest rates, but the recession concerns could slow down the process, which could keep the British pound under selling interest.

Now, ahead of the UK data, during the Asian trading, we get the from the latest BoJ gathering. At that gathering, the BoJ kept all its policy settings untouched, noting that it would offer to buy unlimited amounts of government bonds to defend an implicit 0.25% cap around its zero targets every market day.

This put at rest rumors that the Bank may need to tweak its yield curve control policy soon due to the continued tests near that cap and the weakness of the , and reaffirmed the strong willingness of policymakers to stay ultra-loose at a time when other major central banks have flagged aggressive tightening.

A strong reminder of that in the summary of opinions could result in another round of selling in Japanese yen. However, this is conditional upon Russia not adding further fuel to geopolitical tensions by leaving more hints with regard to World War III. Something like that may take the yen soaring due to its safe-haven status.

Finally, on Friday, the only releases on the agenda worth mentioning are Eurozone’s for March and the US’s preliminary for May. The Euro area industrial production is forecast to have slid 1.0% mom after improving 0.7% in February, taking the YoY rate down to -0.8% from +2.0%. The UoM index is expected to have slid slightly, to 64.0 from 65.2.

Traders see a method to Turkish lira’s recent slide By…