European and US equities slid yesterday, perhaps as investors remained concerned over high and aggressive tightening by major central banks. However, today in Asia, indices gained, perhaps due to short covering on the last day of the week. In the crypto world, the tumble continued as also broke below its USD peg.

Investors Remain Concerned Over Inflation, but Cover Shorts on Friday

The traded mixed against the other major currencies on Thursday and during the Asian session Friday. It gained versus , , and slightly against , while it underperformed against and , and fractionally versus and .

This paints a blurry picture regarding the broader market sentiment, as a strong yen points to risk-off trading activity while a sliding franc points otherwise. Thus, to clear things up, we prefer to turn our gaze to the equity world.

There, major EU indices traded in the red, averaging an around a 1% slide each, and although sentiment continued deteriorating during the early US session, as we were approaching the closing bell, things improved, with and closing slightly lower, and entering the positive territory. The gains accelerated in Asia today. 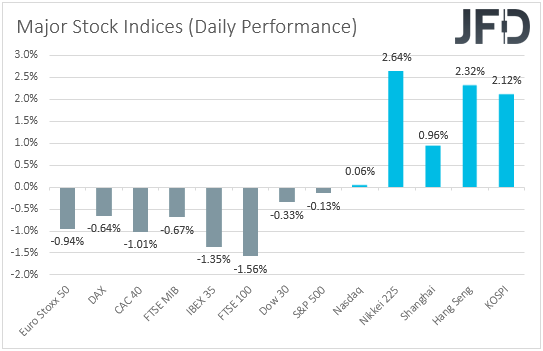 Investors may have continued selling equities due to the US CPI data revealing that inflation slowed by less than anticipated in April. This confirmed the case that the Fed might need to continue with its plans of tightening fast, and although the probability for a 75bps hike has not risen much, Fed Chair Jerome Powell said yesterday that they are prepared to do more than 50bps hikes if needed.

In our view, most participants may have remained reluctant to place back bets over a triple hike due to the slowing by more than expected. With prices feeding into consumer prices, this could mean that the CPIs may slow more in the months to come.

Another reason why equities kept falling yesterday may be geopolitics. Tensions dialed up after Finland announced that it would apply for NATO membership, with Russia warning that this could result in consequences. But why did Asian markets rebounded and even gain? Perhaps due to short covering before the end of the week.

In our view, it was not a buying rally, as the fundamentals still point to further declines in equities. We believe that market participants are in a rebalancing process on the last trading day of the week. With that in mind, we see decent chances for European and US indices to rebound somewhat as well today.

Another development worth mentioning was the extension in the tumble of cryptocurrencies, with falling below $30000 and depreciating around 15%, as Tether, the largest stablecoin by market cap, broke below its USD peg. All this was the result of the meltdown in , another stablecoin, which is now trading at USD 0.15.

The cash index traded higher after hours, but that has barely changed the broader picture of the index. It remains well below the downside resistance line drawn from the high of Jan. 5, and thus, we would see decent chances for the bears to regain control soon.

As we already mentioned, we may see some further recovery in equities today, and thus, we will not get surprised if we see the price breaking above the 3675 barrier, marked by the low of Apr. 27. However, the bears could still take the reins from near the aforementioned downside line and may push the action back down for another test near 3513, a support marked by the low of May 9.

The index will already be above the downside line, and thus, the bulls may get encouraged to climb towards the 4180 or 4245 territories, marked by the highs of Feb. 16 and 10, respectively. If they don’t stop there, then a break higher could set the stage for advances towards the peak of Jan. 5, at 4395.

EUR/USD fell sharply yesterday, breaking below the key support territory of 1.0470/90, acting as a temporary floor since Apr. 28. The slide met our next support at 1.0350, which provided strong support back in December 2016 and January 2017, and then the rate rebounded somewhat. Overall, EUR/USD remains below the downside resistance line taken from the high of Mar. 31, and thus, we would expect more declines in the short run.

The rebound may continue for a while more, but the bears may retake charge from near the 1.0470 zone. This could result in another slide near the 1.0350 barrier, where a break would confirm a forthcoming lower low and perhaps carry extensions towards the 1.0235 zone, marked by the inside swing high of July 2002.

The outlook could become brighter upon a break above 1.0695, marked by the inside swing low of Apr. 25. This could also signal the break above the downside line taken from the high of Mar. 31 and may initially target the 1.0760 zone, where a break could carry extensions towards the 1.0845 barrier, marked by the high of Apr. 22.

If the bulls are unwilling to stop there, we could see them sailing towards the high of the day before, at 1.0935, the break of which could extend the advance towards 1.1025, a level defined as a resistance by the inside swing low of Apr. 1.

Dollar Edges Lower, But Remains Near 20-Year High By Investing.com

Tech groups cut jobs and risk-taking in new reality of…

Australia to List Bitcoin & Ethereum ETFs for the First…