The advanced sharply, surging +2.5% Friday, closing at $3,091.06, bringing the total gain from the bear market bottom rebound beginning on Oct. 12, 2022, to more than +12%, some of the gains could be attributed to the hope of a less aggressive rate hike schedule going forward that has rattled the market for months with the S&P 500 still down -18.2% for the year, narrowly escaping bear market territory after Friday’s strong gain.

Conversely, a close back below the 50-day moving average would place the recent advance on a less firm technical footing and signal further weakness until the price can maintain above that widely followed MA. The treasury market is having liquidity issues and could bleed into the derivatives market, so that is something that everyone should be watching as it could clip the wings of this rally fast.

Expect the bears to show up in the 3905 level in the S&P 500, the first test for the bears will be to take out 3850 on a closing basis. If that happens, the 3800 breakout level will be a critical level the bears will try to close below. Seasonality suggests that we’re entering a bullish phase, so any weakness over the next couple of weeks would be unusual.

That said, the  had risen 12% off the lows in 12 days. Hence, a period of consolidation or some giveback is certainly plausible, and that’s what the options market is reflecting, especially the orders placed just after the close on Friday that we’ve highlighted below.

Wednesday, we will see another , and any deviation from the perceived rate schedule increases the likelihood that the market could sell off again, hard and fast. We are still in a bear market, and that fact hasn’t changed, even though technically, we do have a one-day close in the SPY where the price is slightly less than -20% below 52-week highs, although we are anticipating trading to be choppily headed into the FOMC minutes however the Put/Call ratio has gotten back to the point that the short squeeze may be running on fumes according to this chart. We could see price stall near these levels. 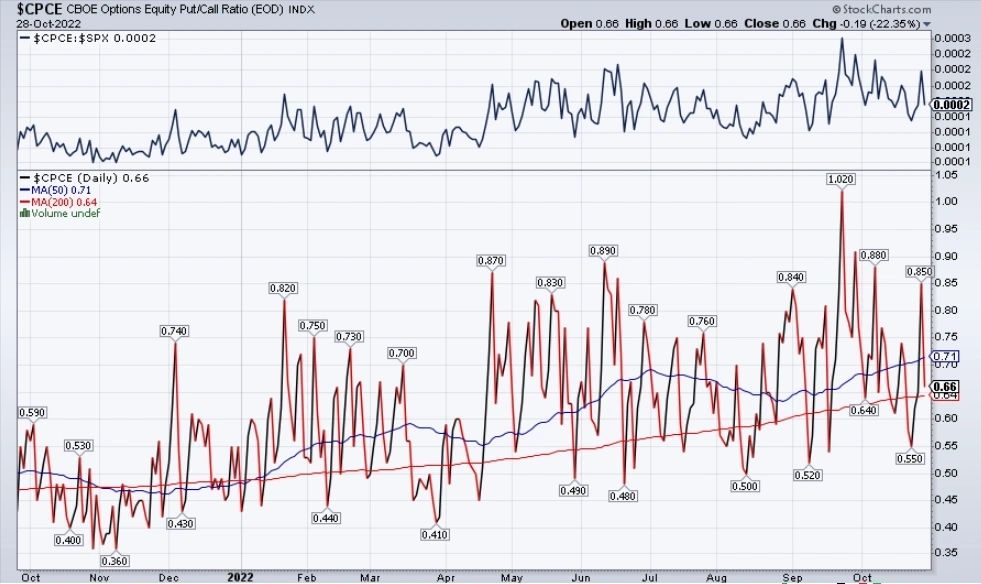 The finished up the week with its most substantial one-day surge since May 27, while the S&P 500 surged +$93.76, its most significant gain since Oct. 17, 2022, with the MTD advancing +8.8% as stocks corporate buy-back window opened back up on Friday amidst a flurry of tech earnings reports.

Seasonality is on the Investors’ side this time of year. Going back over 50 years of data shows that the S&P 500 is historically bullish from now through January.

An introduction to decentralized NFT catalogs By Cointelegraph

Lula wins Brazilian election, Bolsonaro has not conceded By Reuters

Tesla Stock up 77% in January Off the Lows, Fridays Volume 3x Higher than Normal

Pre-Election Years Are Historically Positive for Markets; Will 2023 Be an Outlier?

Intel’s weak guidance points to more trouble ahead for US…

Will Next Rate Hike Mark the End of the Fed’s Cycle?