The Federal Reserve’s for its target rate on Thursday—the biggest increase since 1994—signals that the central bank is increasingly committed to fighting .

The FOMC statement was certainly clear on intent:

“With appropriate firming in the stance of monetary policy, the Committee expects inflation to return to its 2 percent objective and the labor market to remain strong.”

The challenge is that intent remains well behind current pricing conditions. Consumer inflation, running at an annual 8.6% in June, is far above the revised Fed funds rate, which is now at a 1-1/2-to-1-3/4% range. That implies a series of aggressive hikes in the months ahead. Not surprisingly, Fed funds futures are projecting another 3/4 percentage-point hike for the July FOMC meeting.

Note, however, that the eased yesterday (June 15) for the first time in more than a week, settling at 3.33%. One day could be noise, but the market may be starting to consider the implications of ongoing rate hikes in terms of the effect on the economy.

“[The Fed is now] telling you: We will do whatever it takes to bring inflation to 2%.”

“It’s not like there’s no way you can avoid it. But it’s going to be hard to avoid it.”

“We’re not trying to induce a recession now, let’s be clear about that.”

Nonetheless, policy mistakes by the central bank are hardly rare and so the market will be increasingly mindful that tightening could go too far for too long.

That risk appears low when looking at inflation, which is far above the Fed’s policy rate—a gap that implies that many rate hikes are still needed for the foreseeable future. But the 10-year rate may be increasingly focused on economic conditions overall, which may suffer from higher rates. In that case, weaker growth and recession will likely boost demand for safe assets, such as Treasuries. In turn, yields may soon peak.

That possibility is implied in today’s revised estimate of ‘fair value’ for the 10-year Treasury yield, which is based on averaging three models (see details here). Today’s update puts the fair value for the 10-year rate at 2.54% for May, or nearly 40 basis points below last month’s monthly average market rate of 2.90%. The gap marks the second month of a market yield above the average fair-value estimate, a sharp change from the previous trend. 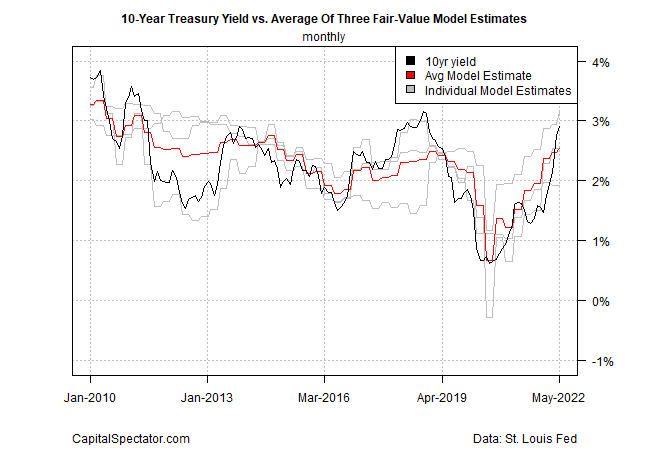 The question is whether the market will prioritize pricing the outlook for ongoing rate hikes over the risk of slower growth and/or recession? Unclear, but Mr. Market will at some point be forced to choose.