If the Fed normalizes its balance sheet and markets freak out, it will be a bridge too far. But interest rate hikes won’t crash a strong US economy. With Fed officials increasingly hawked up, the narrative shifted from a tapering of asset purchases to potential interest rate hikes. And now, with whispers of the Fed plotting to normalize its balance sheet, questions have arisen over the potential impact on the PMs.

After admitting that “is alarmingly high, persistent, and has broadened to affect more categories of goods and services,” Federal Reserve governor Christopher Waller implored the Fed to sell some of its bond holdings.

For context, tapering means that bonds are purchased at a slower pace or not at all. However, even zero purchases result in the Fed’s nearly $8.76 trillion in bond holdings remaining constant. Conversely, if the Fed reduces its balance sheet by selling bonds to private investors, it’s akin to a taper on steroids. Waller said:

“If we start doing some balance sheet runoff by summer, that’ll take some pressure off, and you don’t have to raise rates quite as much. My view is we should start doing that by summer.”

However, is this a plausible path for the Fed over the medium term? In a word: no. While the prospect is profoundly bullish for the and profoundly bearish for the PMs, Chairman Jerome Powell will likely avoid quantitative tightening.

Second, the Fed’s only hawkish goal is to calm inflation. To explain, when inflation was running hot, and most Americans bought into the “transitory” narrative, and Fed officials exuded confidence. However, when consumer confidence sunk to a 10-year low and inflation became political, the Fed changed its tune. As a result, Powell wants to reduce inflation while tightening as little as possible (3% to 4% inflation may be considered acceptable in 2022).

Thus, normalizing the balance sheet is likely a bridge too far. However, please remember that if quantitative tightening is a ten on the hawkish scale, hitting a seven or an eight is still profoundly bearish for the PMs.

To that point, many short and medium-term bulls support the narrative that “the Fed is trapped.” For context, we’re bullish on the PMs over the long term. However, we expect sharp medium-term corrections before their uptrends resume.

Moreover, the narrative implies that the Fed can’t tighten monetary policy without crashing the US economy. Thus, Fed officials are “trapped,” and the PMs should soar as inflation runs wild. However, this hyper-inflationist theory is much more semblance than substance.

As evidence, anxiety has increased with US monetary and fiscal spending stuck in reverse/neutral. For example, the Fed is tightening monetary policy, and Americans are no longer receiving stimulus checks and enhanced unemployment benefits. Moreover, US President Joe Biden’s $1.75 trillion stimulus package was torpedoed by Senator Joe Manchin. As a result, who knows if it will pass in 2022?

While “the Fed is trapped” crew cites these issues as reasons for an economic calamity, they often miss the forest through the trees. For example, while the fiscal spending spree may end, US households are still flush with cash. Please see below:

Likewise, even though US stimulus has disproportionately flowed to the top, the bottom 50% of American households (based on wealth percentiles) still have plenty of money to spend. Please see below: 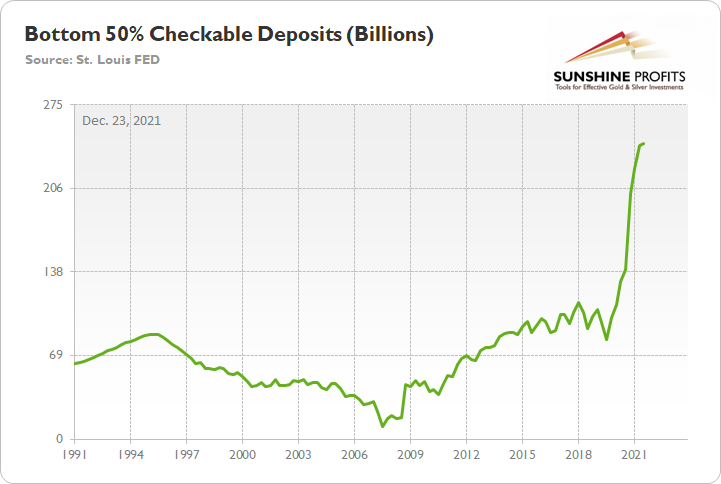 To explain, the green line above tracks the checkable deposits held by the bottom 50% of US households (again, data released on Dec. 9). And with these individuals sitting on nearly $243 billion in cash, it’s 142% more than Q4 2019.

Finally, it’s important to remember that more than 75% of Canada’s exports are sent to the United States. And with the former’s exports to the latter hitting an all-time high in October (data released on Dec. 7), it’s another indicator that US consumer demand remains resilient.

While some investors expect a dovish 180 from the Fed, they shouldn’t hold their breath. With US economic growth still resilient and the US consumer in much better shape than some portray, the Fed can raise interest rates without crashing the US economy. As a result, Powell will likely stick to his hawkish script and forge ahead with rate hikes in 2022.

Conversely, the only wild card is the Omicron variant. If the latest strain severely disrupts economic activity, the Fed could slow its roll. However, this is extremely unlikely. For one, the strain’s spread has been violent, but so far, the data shows it’s much milder than Delta.

Second, the Fed needs to solve its inflation problem. And with the FOMC’s dot plot and officials’ rhetoric nodding in agreement, they likely realize that a continuation of 6%+ inflation will do more harm to the US economy than raising interest rates.

Also, please note that when the Fed called inflation “transitory,” I wrote for months that officials were misreading the data. As a result, I don’t have a horse in this race. However, now they likely have it right. Thus, if investors assume that the Fed won’t tighten, their bets will probably bust in 2022.

In conclusion, the PMs rallied on Dec. 22, as an FDA approval of Pfizer (NYSE:) coronavirus treatment pill helped uplift sentiment. However, the next several months will likely test their mettle. With the Fed hawked up and little stopping interest rate hikes in 2022, the pace of the current liquidity drain should surpass the precedent set in 2013/2014. As a result, more downside likely confronts the PMs over the medium term.

EU proposes tax incentives for equity financing like those…