European shares gained yesterday due to the better-than-expected for May, with the also spiking higher and breaking a downside line against the after ECB President Lagarde confirmed the case for rate hikes by the ECB.

Today, market participants will lock their gaze on the preliminary PMIs for May from the Eurozone, the UK, and the US, as they try to get a better picture of the global economy, while tonight, during the Asian session, the on monetary policy.

The US dollar traded mixed on Monday and during the Asian session Tuesday. It gained against , , and slightly against , while it lost ground versus , EUR, and slightly versus . The greenback was found virtually unchanged against .

The weakening of the risk-linked Aussie, Kiwi and Loonie, combined with the strengthening of the safe-havens franc and yen, suggests that, at some point yesterday or today in Asia, sentiment deteriorated again.

Turning our gaze to the equity world, major EU and US indices traded well in the green. Still, appetite deteriorated during the Asian session today, with all Asian indices under our radar trading in the negative territory. 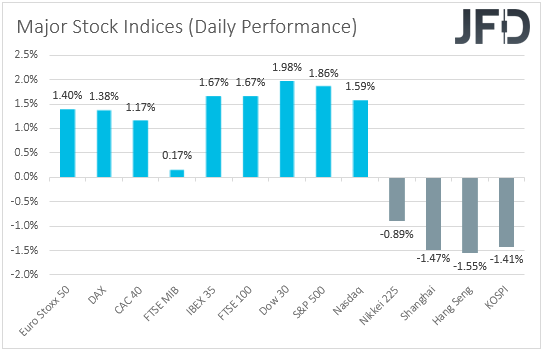 European shares may have been boosted by the unexpected rise in German business morale, as indicated by the Ifo survey for May. In our view, this underscores the resilience of the Euro-area’s biggest economy in the face of high , the war in Ukraine, and supply chain problems around the globe, and adds credence to the view that the ECB is getting closer to pushing the hike button.

ECB President Christine Lagarde said yesterday that the ECB is likely to take its deposit interest rate out of the negative territory by the end of September and could lift it further if needed. Given that the deposit rate is at -0.50%, we believe this means two quarter-point liftoffs, one in July and one in September. This is what Policymaker Villeroy de Galhau said after Lagarde’s speech. He also added that those liftoffs are essentially a done deal.

All this resulted in a spike higher in the euro, with the EUR/USD pair emerging above the downside resistance line drawn from the high of Mar. 31. Technically, this points to some further advances, but the fundamental spinoff also supports that. We are receiving encouraging data and headlines surrounding the Eurozone economy so far, but some concerns over the US outlook persist.

Even if EUR/USD trades a bit higher, we are reluctant to change our stance concerning equities. For now, we will continue treating any further recovery as a correction. After all, cementing expectations over rate hikes by the ECB means higher borrowing costs for European firms.

And actually, we don’t expect the Fed to slow down for now. We still see two 50bps increments in June and July, respectively. According to the CME FedWatch tool, both those double hikes are fully priced in.

EUR/USD spiked higher on Monday, breaking above the downside resistance line drawn from the peak of Mar. 31. This, combined with the fact that the rate has also been respecting an upside support line drawn from the low of May 13, suggests that the short-term outlook may have turned somewhat positive for now.

If the bulls are unwilling to stop there, we may see them aiming for the 1.0845 zone, where another break could target the key obstacle of 1.0935, which acted as a temporary ceiling between April 6th and 21st. If they don’t abandon the action there either, we may see them pushing towards the 1.1025 area, marked by the inside swing low of Apr. 1.

On the downside, we would like to see an apparent dip below 1.0470 before we reconsider the bearish case. Such a move would confirm the rate’s return below the aforementioned diagonal lines. It may initially target the 1.0350 zone, marked by the lows of May 12 and 15, the break of which could carry larger bearish implications, perhaps setting the stage for a teste near the 1.0235 territory, marked by the inside swing high of July 2002.

The cash index traded slightly higher yesterday but remained below the downside resistance line drawn from the high of Jan. 5. So, as long as the index is trading below that line, we will see decent chances for another round of selling.

The bears could retake charge from near the 3755 barrier, marked by the high of May 17, or from near the aforementioned downside line. If so, we could see another leg down to the low of May 9, at 3513, the break of which carries extensions towards the low of Mar. 7, at 3385.

If the bears are not willing to stop there either, we may see them pushing towards the inside swing high of Oct. 19, 2020, at 3290. To start examining whether the bulls are in full control, we would like to see a clear break above the peak of Apr. 29, at 3830.

This could confirm the break above the downside line taken from the high of Jan. 5 and could initially pave the way towards the 3963 barrier, marked by the high of Apr. 21, or the peak of Mar. 29, at 4025. If neither barrier can stop the advance, we may experience extensions towards the peak of Feb. 16, at 4180.

PMIs To Paint A Picture Of Global Economic Performance

Today, investors are likely to lock their gaze on the preliminary PMIs for May from the Eurozone, the UK, and the US, as they would like to have a clearer picture with regards to the performance of the global economy.

Though pointing to a slowdown, all three indices are expected to remain within the expansionary territory. Thus, we don’t expect market participants to withdraw their bets concerning the ECB’s future course of action. We believe that a negative surprise and a dip below the boom-or-bust zone of 50 may be needed for that to happen. 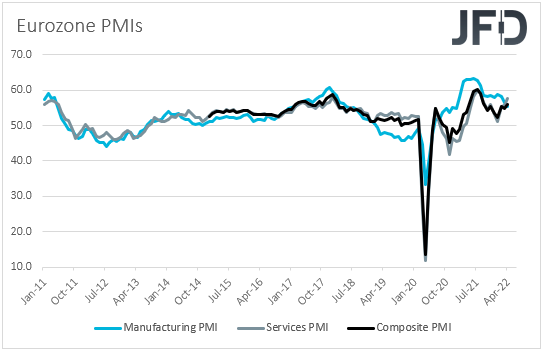 Expectations are for relatively small declines in the UK as well. Still, with the BoE warning over an economic contraction next year, any misses could bring the pound under selling interest, as market participants could lower their expectations regarding the Bank’s future rate increments.

Yes, with in the UK hitting 9%, the BoE will most likely continue to lift borrowing costs, but due to fears of a recession, they could follow a slower path than they had been estimating a couple of months ago.

Now, flying to the US, there, the index is expected to have declined to 57.9 from 59.2, while the to tick down to 55.4 from 55.6. Declines in the world’s largest economy could also confirm concerns over a worldwide economic slowdown.

However, if the forecasts are met, both indices will still be above the equilibrium line of 50. With Fed Chair Jerome Powel hinting that they will proceed with their 50bps increments in the next couple of months, we don’t expect market participants to change their minds.

RBNZ Set To Hike By 50bps, But Will It Sound Hawkish?

As for tonight, during the Asian session Wednesday, the spotlight is likely to fall on the RBNZ interest rate decision. This Bank is expected to hike interest rates by 50bps for the second time in a row, with the number of total hikes – regardless of the size – in the post-pandemic era being 5.

When they last met, officials of this Bank hiked by 50bps points. Still, they noted that they remained comfortable with the outlook for the OCR as outlined in February and that the larger move was intended to provide more policy flexibility. In other words, they may have decided to hike more than to be able to slow down later. 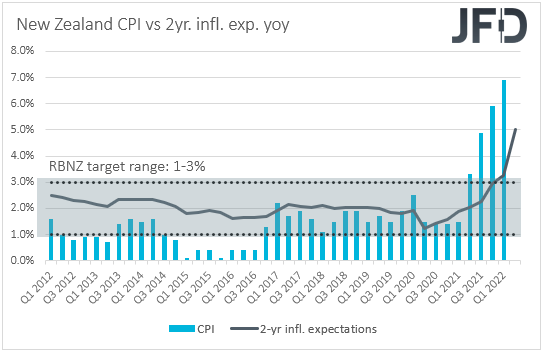 The Kiwi came under selling interest after the meeting, but more recently, due to its strong link to risk, it has been feeling the heat of the deterioration in the broader market sentiment. It slowly started correcting a bit higher after the release of the RBNZ’s latest inflation expectations, and that’s maybe why participants are betting on another double hike, despite the Bank’s language following its last decision.

So, with that in mind, a 50bps hike by itself is unlikely to boost the Kiwi much. For that to happen, officials need to sound more hawkish than in April, leaving the door open to more increments of such kind. Now, suppose they hike by less or signal that this was a flexibility move, not intended to steepen the rate-path projections. In that case, the commodity-linked currency is likely to come back under selling interest.

How Russia was driven to default By Reuters