On Wednesday, ahead of the US Federal Reserve’s , futures on the , , and all traded just slightly higher while European shares returned to a selloff. Markets are the Fed to announce a 50 basis point hike, double the usual amount, but traders are keenly awaiting the as well as any comments from its Chair, Jerome Powell on the central bank’s future outlook or plans.

As a result US Treasury yields moved higher.

US futures fluctuated this morning between gains and losses but were little changed. In Europe, investors sold off the Index with miners the worst performing sector.

The Europe-wide gauge formed possible Evening Star’s resistance, a three-day bearish pattern which confirms the earlier top and is supported by the 50 DMA, after finding resistance by the 200 DMA as the 100 DMA came crashing through it.

Russia’s leading benchmark, the index, gave up initial gains after the European Union it plans to stop importing Russian oil for the next six months. This action is the sixth tranche of sanctions imposed by the EU in an attempt to break President Vladimir Putin’s spirit as he wages war on Ukraine. 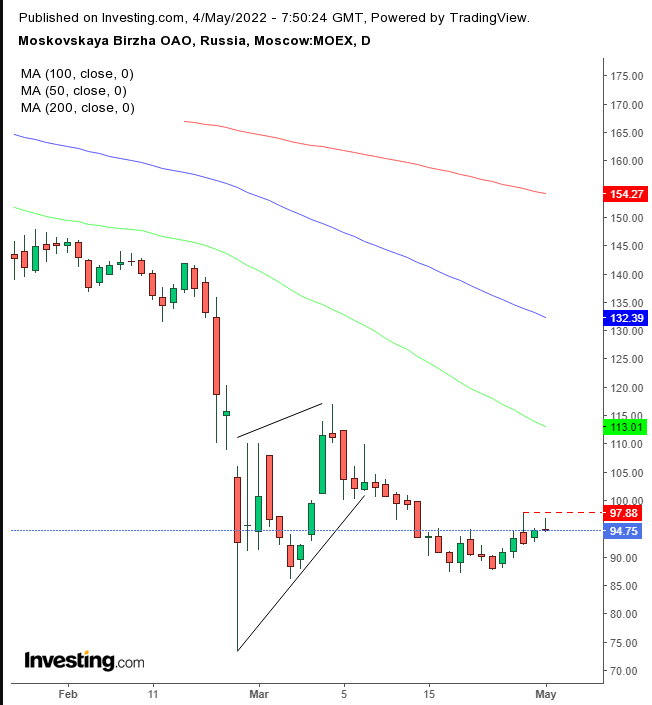 The price found resistance by Monday’s Shooting Star, confirming the resistance of a rising flag.

The EU is also seeking to increase the pressure on Russia by Sberbank (MCX:) and two other Russian lenders from the international SWIFT payment system, further cutting off the country from the global financial network.

While markets in Japan and China remain closed today due to holidays, the remaining indices in Asia finished lower. Hong Kong’s underperformed, falling 1.1%, probably under pressure after China’s fell by more than expected. Since China’s mainland markets have been shut for the long holiday, traders have only been able to offload Chinese stocks on the Hong Kong exchange.

Treasury yields on the note continued to be the focus, as they approached the 3% level for the third day in a row. So far, the push beyond that threshold has been repelled. Yields are being pressured as investors increase Treasury holdings while weighing the odds of a higher-than-usual Fed hike today or at the June meeting. Treasuries are also a haven as the war in Ukraine continues.

The was little changed. 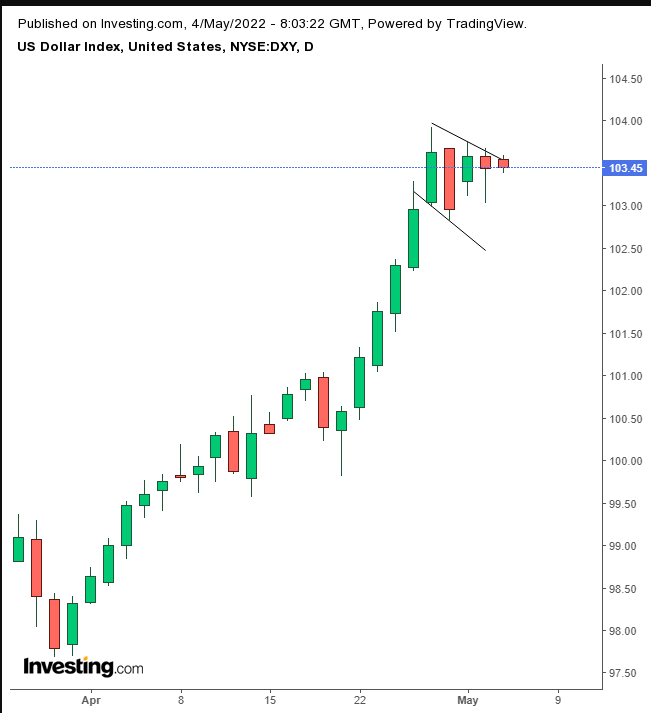 The greenback may be forming a falling flag, bullish after the six-straight daily advance to the USD’s strongest position in 20 years.

edged higher, extending yesterday’s advance but then slipped. Commodity analysts are divided on the precious metal’s trajectory with some having very . There’s the view that the yellow metal will rise as a haven amid ongoing geopolitical tensions in Europe as well as because it’s an inflation hedge. Others, however, believe the price will fall on the fastest US monetary policy tightening in 22 years. Perhaps, the two themes will offset each other? 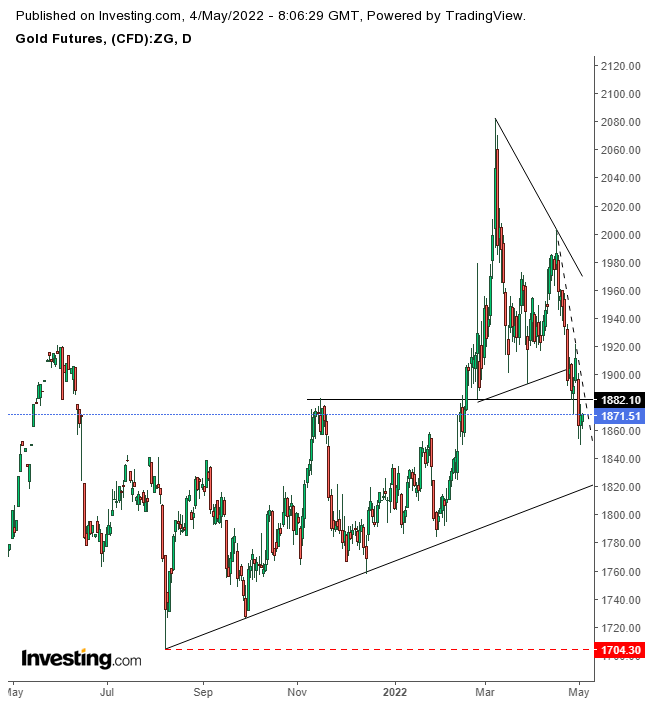 The price completed a symmetrical triangle to the downside, falling below the Nov. 16 support. However, the rising trend since August 2021 may provide support. We think gold is more likely to fall rather than rise. If the commodity falls through the uptrend line, we wouldn’t be surprised to see it drop to near the $1,700 level.

rose, wiping out yesterday’s losses and pushing to its highest level since last Thursday. 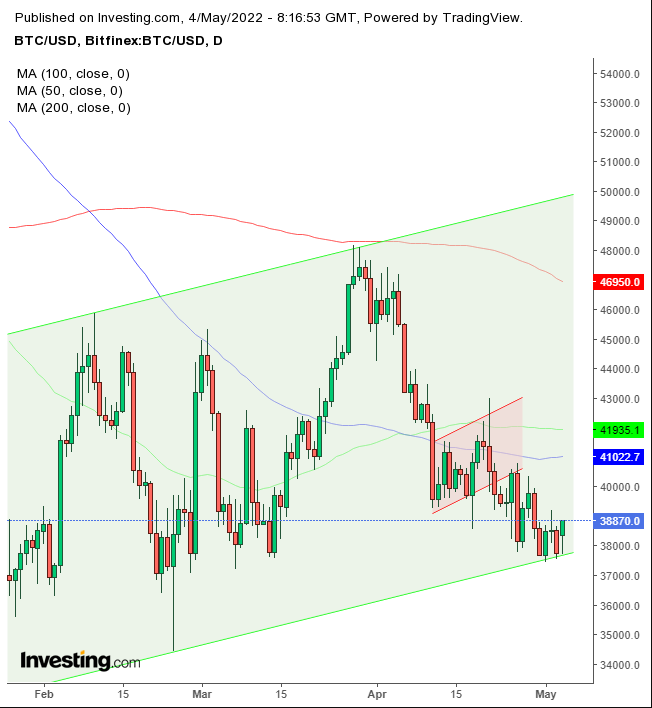 The price continues to struggle on the rising channel bottom as bulls fight the bears after the preceding rising flag. We have been the cryptocurrency to fulfill a large H&S top for months now.

climbed amid European plans to wean itself off Russian energy supplies. 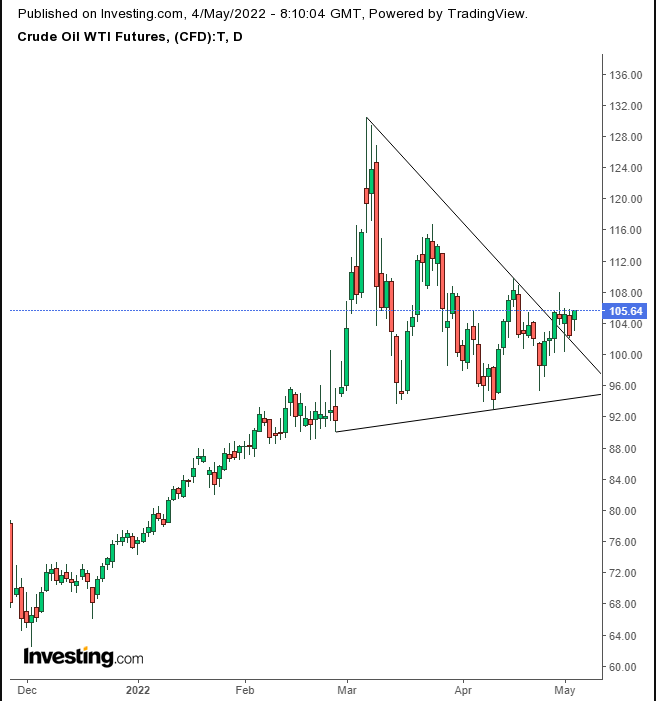 The price might have completed a bullish triangle, though we would have been more enthusiastic if there was a decisive move rather than the small price changes seen throughout this week.

G7 to stand with Ukraine ‘for as long as it…