On Thursday futures on the , , , and were marginally up while European stocks traded lower ahead of US Federal Reserve Chair, Jerome Powell’s second day of to Congress. Yesterday he , in his semiannual monetary policy report that higher interest rates could cause a recession.

Oil fluctuated but remains above $105 as CEOs of seven oil majors are US President Biden at the White House.

NASDAQ 100 contracts rebounded into clear gains after the underlying index closed in the red yesterday. Futures on the S&P 500 Index also traded higher followed by Dow and Russell 2000 futures. We suspect today may see some in markets as earlier all four contracts were trading in the red.

The European session opened lower, with the Index falling to its lowest level since Feb 1, 2021. Energy and mining stocks underperformed as ongoing concerns of an economic downturn dented commodities. Investor sentiment was dented by the Fed Chair’s comments, lower than expected data and an S&P Global  which showed euro zone business growth slowed significantly in June.

Asian markets were mixed, with inflation concerns dominating headlines. China’s closed up 1.62%, outperforming while South Korea’s dropped 1.22% to its lowest level since Nov 2, 2020.

Powell’s admission that the US central bank found it challenging to walk the fine line between taming inflation while maintaining a solid job market and avoiding a recession ended a two-day rally in US markets. However, the selloff was tempered by his reassuring remarks about the economy’s strength.

Treasury yields on the note extended an advance, moving towards 3.1%.

Yields neared a triple support area: the May highs, the uptrend line since the Mar low, and the 50 DMA.

After a two-day decline, the advanced. It may be developing a bullish pattern. 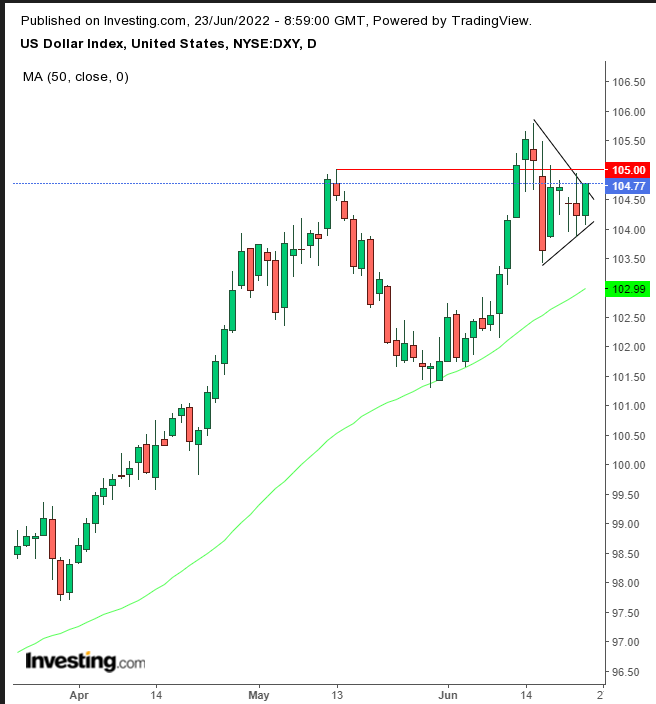 The greenback was testing the top of a pennant, bullish after the preceding five-day rally. However, the pattern is only complete upon an upside breakout. This continuation pattern is a market device to help it overcome resistances, such as the May highs. 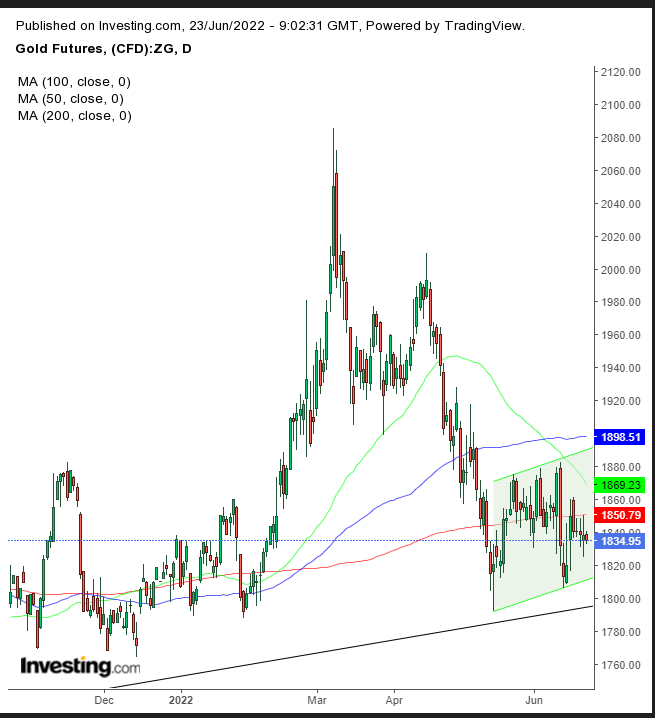 Technically, the yellow metal is out of sorts. A rising dollar is keeping it down, but there is still sufficient demand to maintain it within a short-term rising channel and a long-term uptrend (black). On the other hand, the 50 DMA slumped below the 100 DMA and is falling hard and may cross below the 200 DMA which would trigger a Death Cross.

climbed back above the psychological round $20K level. 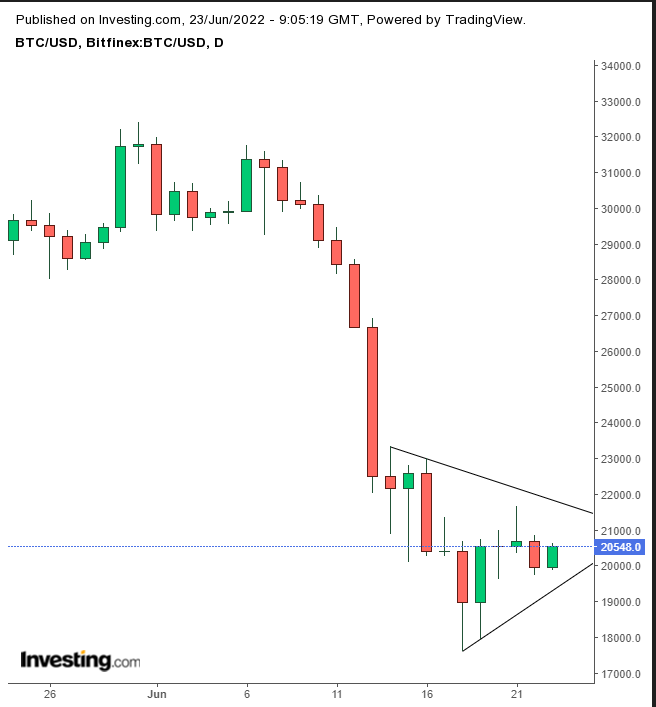 The cryptocurrency is trading according to a pennant formation, bearish after the preceding seven-day-straight loss. A downside breakout will confirm our long-term bearish call. According to the principles of technical analysis, the digital currency’s bearish pennant implies a target around $5K.