Dip buyers of chemical, mining, and oil shares pushed European markets and US futures contracts for the , , , and into positive territory on Tuesday, for the second consecutive day. This follows the worst week for stocks since the sharp March 2020 selloff.

All four contracts on the major US indices were trading well into positive territory with futures on the NASDAQ 100 advancing over 2% at one point, leading the other indices contracts higher. This second day of solid gains is providing some hope of a rebound after a rout erased almost $2 trillion in market value from the last week alone.

However, we must remind investors that we are in a bear market. That means that although there will be rallies, the trend remains lower. Careful traders can buy into the short term.

Remember that, though bear markets have some of the most robust short-term rallies, one is still trading against the prevailing trend, which means market action could turn around rapidly at any time and resume the downward momentum.

The Index also rebounded on Tuesday, for the second day. As of Monday’s close, the pan-European gauge was down 17% for the year.

The index is attempting to bottom, but it will need to demonstrate it can overcome the resistance of a downtrend line on the hourly chart.

While most Asian stocks were in positive territory this morning, and the MSCI Asia-Pacific Index climbed more than 1%, ending an eight-day selloff, China’s declined by 0.25%.

The rebound has been driven by traders who think that last week’s selloff to reprice higher and slower growth was exaggerated, leaving room for an upward correction.

The jump in S&P 500 futures could be a Dead Cat bounce—a corrective rally in reaction to a substantial decline, as opposed to a reversal—after the sharpest selloff since COVID first emerged.

Earlier, the Treasury note sold off as investors rotated back into equities, pushing yields back to 3.3%, but we think this will slip and investors will return to buying bonds. This could also mean that stocks will return to their downtrend. Here’s why. 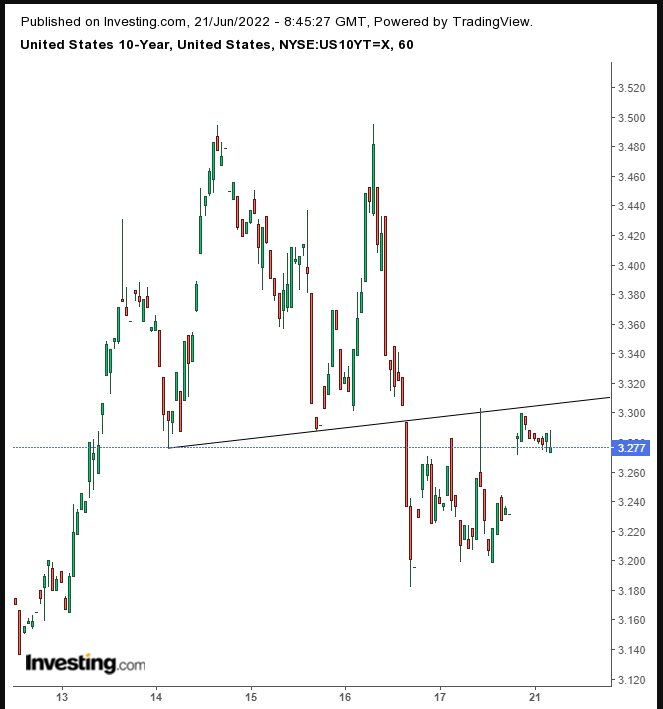 Treasuries completed an H&S top, rendering the current rally a return move—until proven otherwise—as they climbed decisively above the neckline.

The fell for the second day for the fourth out of five sessions. 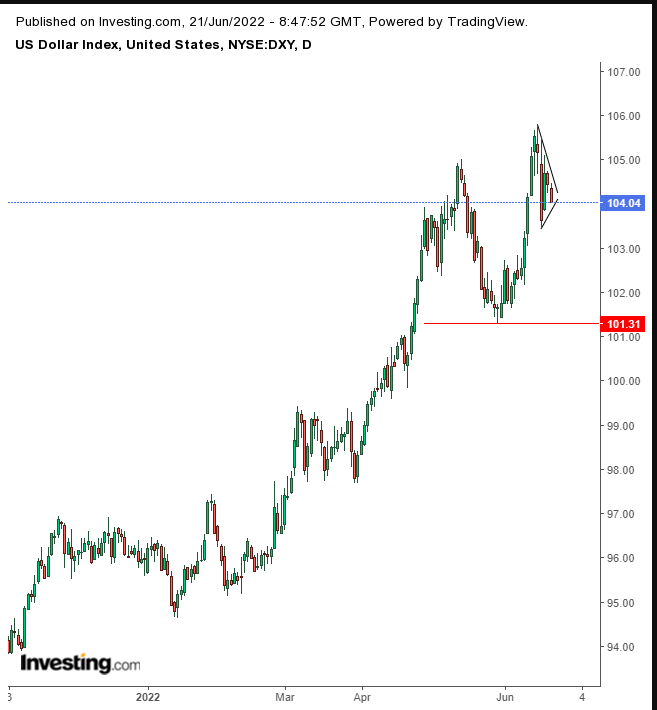 The greenback is forming a bullish pennant, complete with an upside breakout. If, however, the US currency blows the pennant, it could test the May 30 low. If that doesn’t hold, the dollar will complete a Double Top.

is falling for the third day, despite a weakening dollar. As investors turn bullish, all the safe havens—Treasuries, the dollar, and gold—are sliding. But will it last?

We can see the cumulation of this indecision, manifested as a triangle on the gold chart. 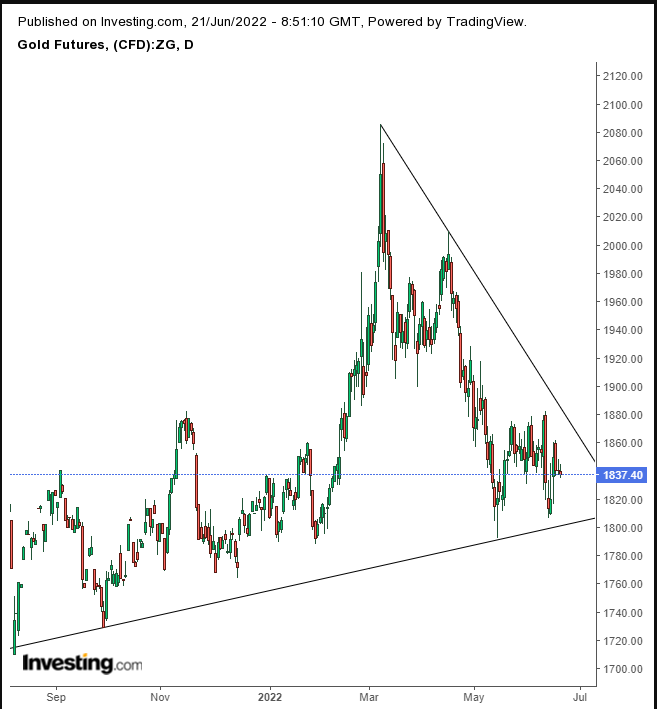 is on the rise, currently trading at over $21K, and the cryptocurrency is extending its rebound to the second out of three sessions and to a 12% advance. This bounce has stirred a much-heated debate on social media between diehard enthusiasts and traditional market observers. While we accept a short-term , we’re very much bearish on the medium to long term.

Having fallen last week on concerns that a recession would curb demand, gained for the second day.

Oil Price Reversions Are The Inevitable Outcome Of…