The US Treasury rout deepened on Monday, dragging down futures on the , , and , pulling the contracts further into the red this morning, ahead of today’s US session. Increasingly stringent COVID restrictions in China weighed significantly on the world’s second-largest economy even as the US Federal Reserve has become the most aggressive its been in 22 years.

As the trading week began, investors found safety in the US dollar, which reached a .

All four major US index contracts were over 1% in the red on Monday, with futures on the NASDAQ and Russell 2000 underperforming as those two indices are most sensitive to rising interest rates.

An ongoing argument on whether investors should focus on attractive stock market valuations after the recent slide, or consider higher US interest rates and maybe even recession seems to be leaning towards the latter view. Friday’s US dispelled any notion that the US Federal Reserve might ease its foot on the interest rate accelerator. Sentiment is growing increasingly bearish which is why the Index has posted its longest string of weekly declines since 2011.

In Europe, the opened lower for the third day in a row after the gauge topped out and bulls failed at their counter-attack. China’s ongoing COVID-19 outbreak has increased concerns of waning demand by the world’s foremost commodities importer, exacerbating a selloff for miners.

The index is completing an H&S top.

stocks listed in Europe dropped 2.1% for the fourth straight day, to the lowest since December 2020.

Dutch postal company, PostNL (AS:) opened 11% lower after it reported a drop in profits and reduced full-year forecasts. The price formed a dramatic breakaway gap following a rising gap. The stock fell to its lowest level since December 2020. However, from a trading perspective, the selloff more than achieved the flag’s implied target. Therefore, it might pay to wait for a corrective rally.

Earlier Monday, Asia opened positively but quickly slipped due to concerns about rocketing inflation as well as lower demand and slower economic expansion from China. In April, growth from China plunged and were flat year-on-year. Chinese customs spokesman, Li Kuiwen attempted to boost investor sentiment by arguing that the country’s economy still has the chance to recover as strong fundamentals remain in place. Perhaps his message resonated; China’s was the only regional index in the green—closing up 0.1%. This was despite a warning from Chinese Premier Li Keqiang over the weekend that his country’s job environment has turned “grave.”

As a result the continues to move higher, climbing for the third day, 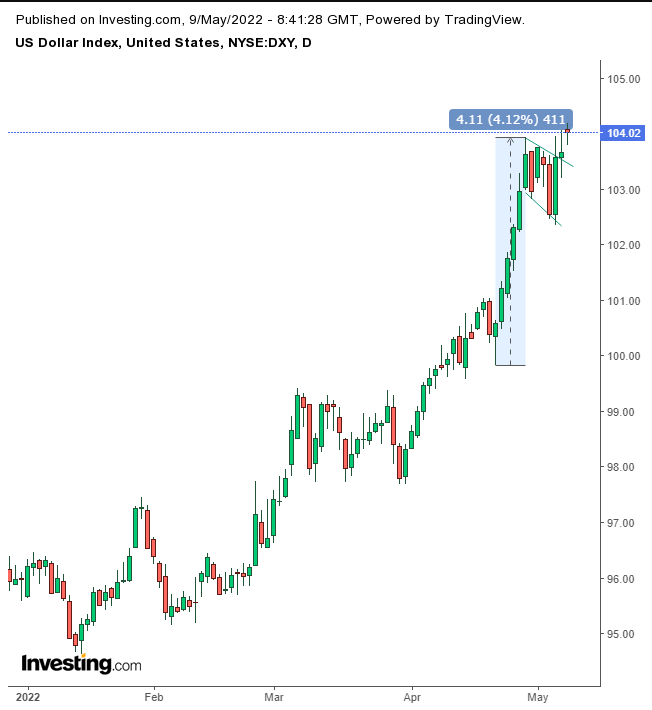 The price jumped with a Breakaway Gap that completed a falling flag, bullish after the six-straight day advance. We expect the greenback to rise to 107.

However, slid on the back of dollar strength, confirming a bearish development. 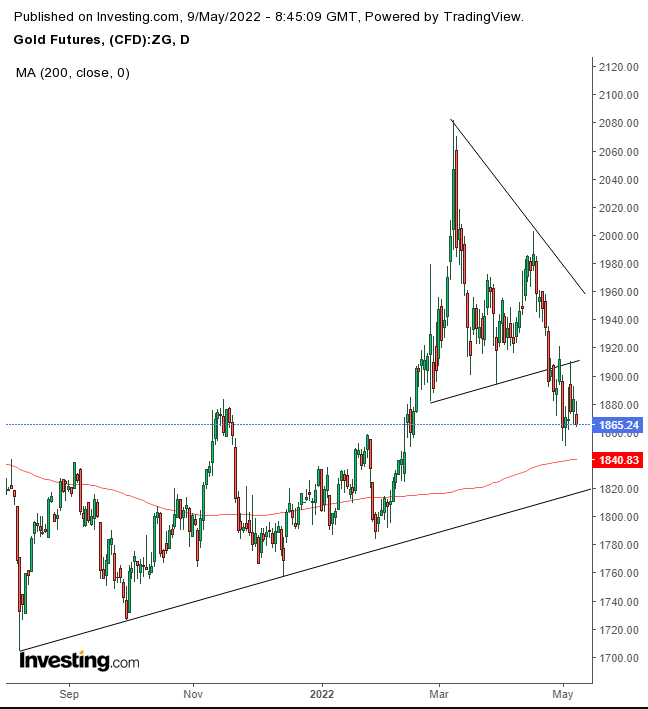 The yellow metal extended a decline after attempting to climb back into a Symmetrical Triangle that broke to the downside. The current supply-demand balance will take on the bulls that formed the rising trendline since August which was reinforced by the 200 DMA.

Will traders bet on a strengthening dollar amid rising interest rates? Or will they extend a vote of no confidence in the Fed’s attempt to reduce inflation in its tracks and hedge with gold, which also serves as a haven during a stock market crash?

If we had to choose, we’d go with the former, but the rising trendline may act as support from a trading perspective.

fell for the fifth straight day, along with other risk assets. 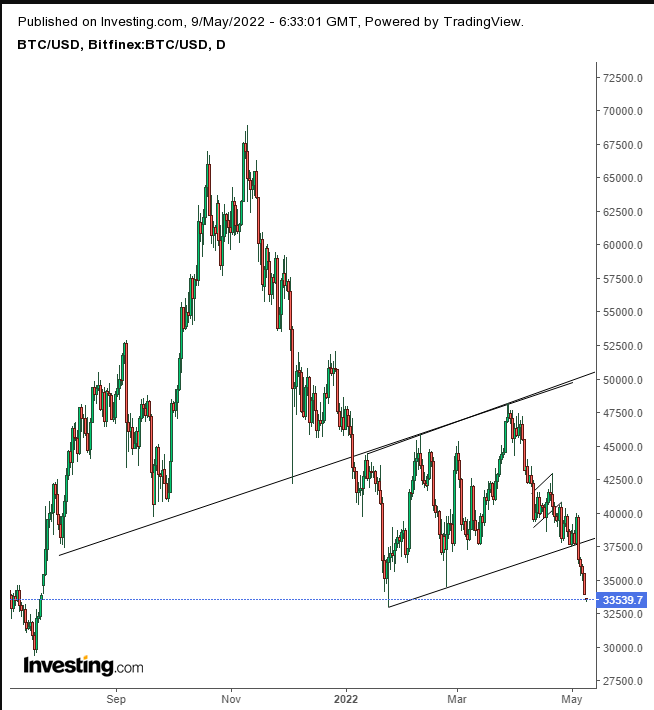 Now that the cryptocurrency finally broke the rising channel, we expect it to along the path set by the preceding H&S top to test the $30,000 before continuing lower.

The same theme of falling demand from China, the world’s largest oil importer, compounded by Europe’s decision to end Russian natural gas imports, has resulted in a 3-day advance in the price of . However, momentum remains to the upside. 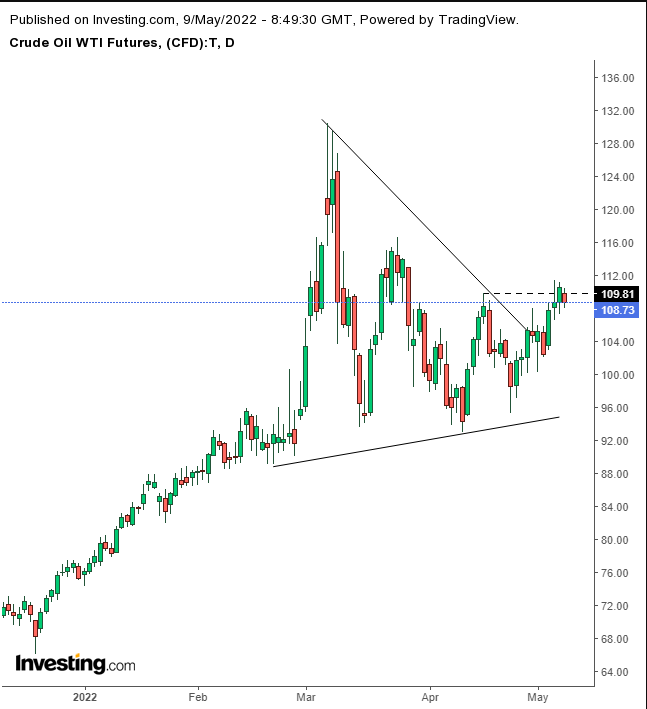 The price completed a Symmetrical Triangle with an upside breakout.

Dollar gains on growth fears ahead of Fed chair’s…

The U.S. Economy Headed For A Hard Landing