US futures, along with European shares, all soared on Thursday, extending yesterday’s rebound during the Wall Street session. Contracts on the , , and , jumped on hopes that Federal Reserve tightening—which the central bank on announced —will manage without slowing down economic growth.

Markets are also waiting for ECB and BoE decisions scheduled for later today.

Yesterday, the Fed said it would double the speed at which it’s rolling back its emergency bond purchasing program scaling to $30 billion a month. The central bank also a 75 BPS interest rate hike over the course of 2022, via three rate adjustments, plus a number of hikes in 2023 to rates up to 1.6%, and to 2.1% in 2024.

As well, the Federal Reserve warned of the potential risks from the latest COVID variant to the economy. Adding to the headwinds: a potential US-China standoff after the House of Representatives voted to ban imports from the Xinjiang region because of forced labor and human rights abuses.

The market narrative is now saying investors are confident the world’s most powerful central bank will successfully strike a delicate balance between reining in overheating inflation while at the same time not upsetting a fragile economic recovery. We can’t say where this optimism stems from, given there’s been a long run of awkward, if not clumsy, policymaking coming from the Fed, ever since COVID made its global appearance, not to mention when inflation reared its head.

We’d be shocked if markets won’t get volatile, even violently so, as global central banks begin tightening, especially during the worst global health crisis in a century.

Futures on the Russell 2000, the stocks most sensitive to a smoothly running economy, led the gainers on Thursday, after technology firms powered Wednesday’s rally during the New York session.

Yesterday, the index advance created a weekly bullish hammer—pending a weekly closing price—at the bottom of a rising range. This move increases the likelihood of a return to retest the benchmark’s 2,458.85 record high, registered on Nov. 8.

This morning, stocks in Europe popped, with all sectors participating, gaining the most in a week. 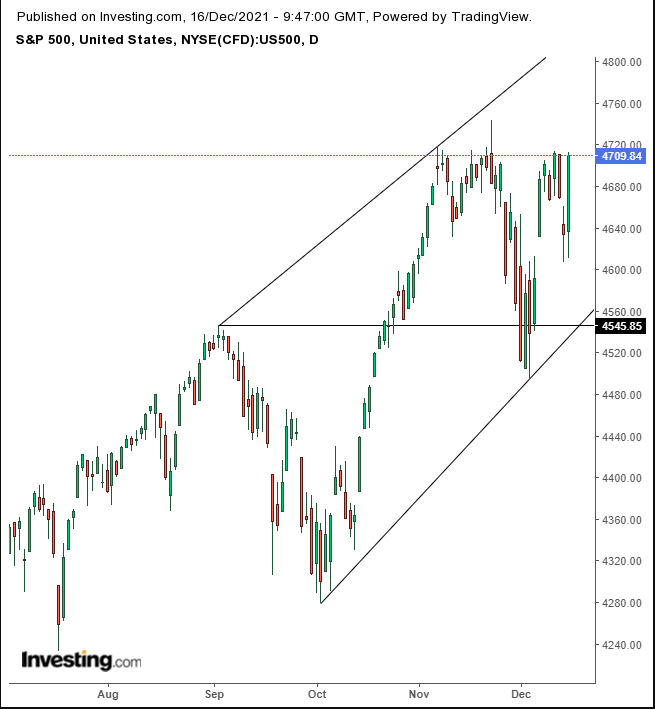 Now, the bulls have to prove they have what it takes to break the 4,720 price line, to resume the up move of the excessively rising channel. Conversely, if they fail, the price will again fall below 4,500, which would mark a top.

The broad benchmark has provided a wild ride for traders. The gauge dropped after the release of the . However, afterward, bulls came rushing out of the woodwork, pushing the index higher during the final two hours of the session.

Yields on the benchmark Treasury slipped. 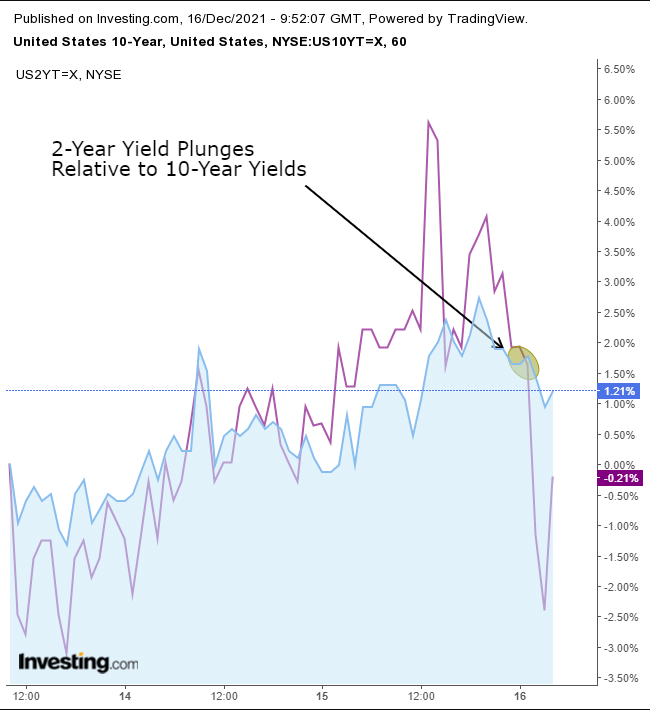 After narrowing over the past few weeks, with the advent of higher rates, the between 10- and yields steepened.

The fell for a second day. 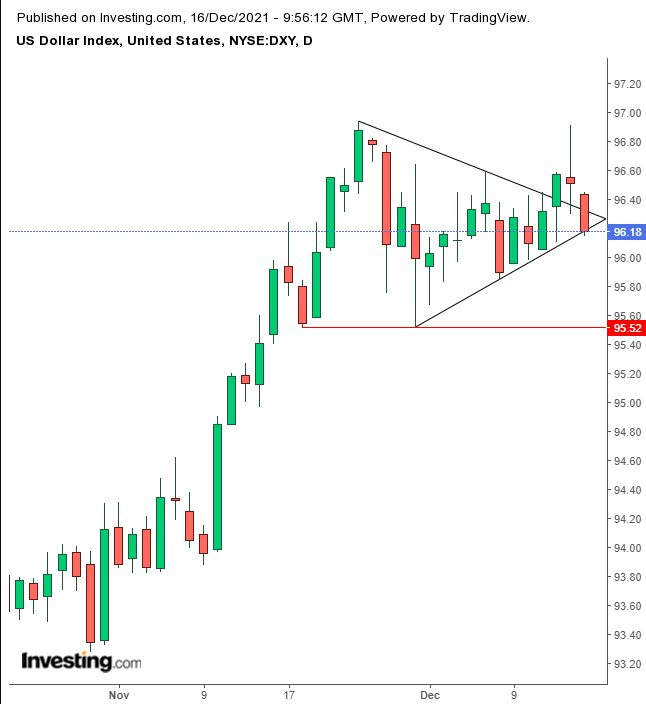 The drop is threatening to turn a bullish pennant into a double top.

opened higher and continued gaining, rebounding from a two-day selloff.

was little changed after a back-to-back pair of daily rallies.

opened higher, boosted by the same optimism propelling equities—that the Fed will manage a challenging time for the economy and that Omicron will not lead to lockdowns hurting oil demand.

Keir Starmer’s moment has come: he must not squander it