Markets-based forecasts aren’t flawless, but for some projects in finance these estimates are the baseline estimates that are often tough to beat. An example is monitoring the outlook for trends and changes in Fed monetary policy. On that front, you could do a lot worse than keeping a close eye on the Treasury yield.

Widely followed as the most-sensitive spot on the yield curve for policy expectations, the 2-year rate has again proved itself worthy in anticipating the current shift to a rate-hiking bias. Midway in 2021’s fourth quarter, the 2-year rate was effectively signaling that the central bank was set to begin a new round of tightening. And so it did, several months later, the first increase in the Fed funds target rate on Mar. 16.

What’s useful for anticipating new tightening phases is no less valuable for estimating when Fed policy has peaked and rate cuts are on the horizon. History suggests that the 2-year rate offers an early and often accurate estimate for these events too.

One way to monitor the signal is via a spread: 2-year rate less effective Fed funds. Tracking this spread through time provides a rough estimate of how the market is pricing in expectations for Fed policy. Not surprisingly, the market is currently telling us that the Fed is far behind the curve and still needs to play catch-up. In theory, a spread close to zero suggests that the market is saying that Fed funds policy is approximately right, neither too hot or too cold. 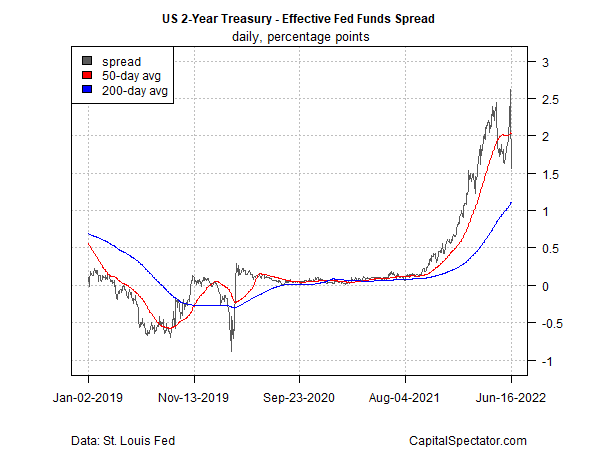 Note, however, that last week’s 75-basis-points hike delivered a substantial round of catch-up action, based on the market’s estimate. The spread is still well above recent levels, but the sharp decline to 1.56 percentage points marks the lowest spread level since early March.

With another 75-basis-points hike expected for the July 27 FOMC announcement, the Treasury market seems to be considering the possibility that the rate-hiking regime is maturing, if not necessarily ending. A complicating factor is the economy, which is slowing. A growing number of economists are forecasting heightened recession risk. In other words, there’s a possibility that the Fed will end or even reverse its rate hikes at some point in the near term, depending on how business-cycle risk evolves.

The Treasury market is having a tough time pricing in the conflicting pressures of high and slowing economic growth, as suggested by the increase in volatility for the 2-year/Fed funds spread recently. Nonetheless, market sentiment will eventually find the signal in the noise. Exactly when is unclear.

At some point the market will be price in a peak in the current rate-hiking regime. The first question: Has that peaking process already started? No, according to the consensus view of most economists and macro observers. Let’s see if the Treasury market agrees, or not, in the days and weeks ahead.

The Tardy Fed and the New Macro

China’s 2022 smartphone shipments the lowest in 10…