The and the underperformed against the other major currencies yesterday and today in Asia, suggesting a risk-on trading environment. However, turning our gaze to the equity world, we see that most indices traded lower. With an empty agenda and thin liquidity, we prefer not to read too much into these moves for now.

US Dollar Slides, Some Equities Pull Back, Others Aim Higher

The US dollar traded lower against all but one of the other major currencies on Wednesday and during the Asian session Thursday. It gained only against JPY, while it underperformed the most versus , , and .

The weakening of the dollar and the yen, combined with the strengthening of the risk-linked Kiwi and Aussie, suggests that markets may have turned to risk-on at some point. Turning our gaze to the equity world, we see that most indices traded in the red during the EU session.

Only UK’s gained, perhaps trying to catch up the recovery of the other indices, as it was closed since Dec. 24. In the US, sentiment improved somewhat. The and the traded higher, but the lost some ground. Appetite was mixed during the Asian session today. 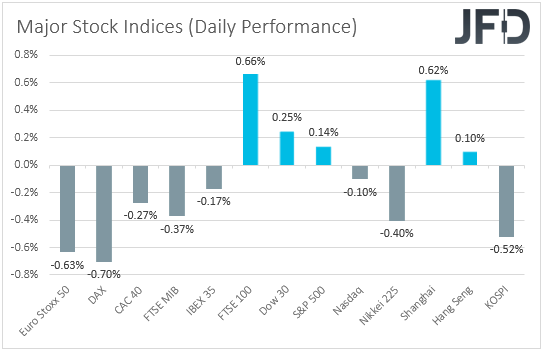 It seems that some investors may have remained concerned over the record increases in COVID cases around the globe, or they may have just kept closing their books for the year. Some others may have decided to continue cheering because the Omicron variant may eventually not lead to full-scale lockdowns.

In any case, with a very light economic agenda this week and thin liquidity, due to most participants being on holiday, we prefer not to read too much into the moves once again.

As for our view, we stick to our guns that the latest setback in equities does not constitute a trend reversal and that there is a decent chance for another rebound and new highs, especially in Wall Street. We will not change our view until we see clear supporting evidence pointing otherwise.

However, that doesn’t mean we will trust a long-lasting recovery with closed eyes. On the contrary, we repeat that we are very reluctant about that. Although the prospect of a full-scale global lockdown may be off the table for now, if the situation worsens, several nations may tighten restrictions after the holidays.

Also, with most major central banks being in the process of removing stimulus to counter high , we cannot rule out some decent setbacks in the markets after the turn of the year.

The Dow Jones Industrial Average cash index trades slightly higher yesterday, to touch, and perhaps overcome somewhat, its all-time high at 36570, hit back on Nov. 8. Then, it consolidated slightly below that barrier. Overall, the index has been in a rising mode since Dec. 20, and with no signs of reversal, we believe that we could see further advances, despite the latest slowdown.

A clear and decisive break above 36570 would confirm a forthcoming higher high and take the index into uncharted territory. The next area to consider as resistance may be the psychological number of 37000, the break of which could carry extensions towards the 37500 zone.

AUD/USD also traded higher yesterday, hitting resistance near the 0.7275 zone, also marked by the high of Nov. 22. Overall, the pair remains above the downside resistance line taken from the high of Nov. 2 and above an upside one drawn from the low of Dec. 3. In our view, all this paints a positive short-term picture.

We will abandon the bullish case if we see an apparent dip below 0.7156. The rate will also be below the upside line taken from the low of Dec. 3, encouraging the bears to dive towards the 0.7094 zone. That zone provided strong support between Dec. 14 and 20.

The calendar is once again almost empty, with the only data worth mentioning being the US for last week, which are expected to have risen to 208k from 205k.

Metaverse Alliance Opens Application and Submission Process for The Hackathon for Metaverse: Metathon By BTC Peers

5 Things To Watch For The Pound In 2022 By Investing.com