Equities Rebounded yesterday, with the Wall Street receiving an extra boost after the ADP private jobs report came in much below expectations. This may have revived speculation over a potential pause, or at least a slowdown, by the Fed after summer, but we are reluctant to share that view. Today, we get the official employment report for May, and the forecasts point to a decent report.

Equities Rebound, USD Slides Ahead of US NFPs

The traded lower against all the other major currencies on Thursday and during the Asian session Friday. It lost the most ground against the risk-linked , , and , and the least against the safe-haven , which suggests that the financial community may have traded in a risk-on fashion.

Indeed, turning our gaze to the equity world, we see that major EU indices traded in the green, with the only exception being Spain’s , which traded virtually unchanged. UK markets were closed due to a bank holiday. Appetite improved during the US session and stayed supported in Asia today, though China remained closed due to the Dragon Boat Festival. 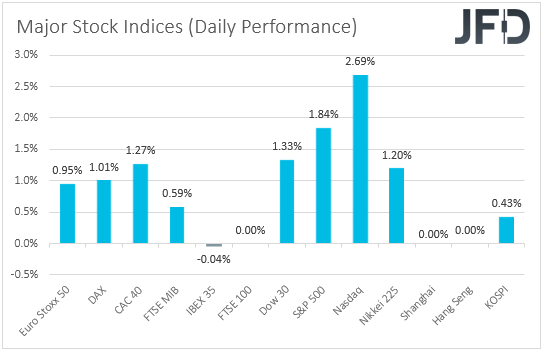 With no clear catalyst behind the rebound, at least in Europe, we suspect that investors may have decided to proceed with short-covering ahead of the official US employment report for May, due out later today.

That said, the steeper gains during the US session and the slide of the dollar may have been the result of the miss in the . The report showed that the private sector had gained 128k jobs during May, a slowdown from a downwardly revised 202k in April and well below the forecast of 300k.

Though the ADP report has a poor record in predicting the private payrolls of the official report, due to a different calculation methodology, the miss may have revived some speculation that the Fed could slow down its rate-hike process after the summer.

However, we remain reluctant to say that this could be the case. Remember that Fed Governor Waller said early this week that he would support 50bps hikes until comes down, while Vice Chair Brainard said that “it’s tough to see the case” for a pause.

Having all that in mind, and considering Chair Powell’s remarks, he wants to keep raising rates until there is clear and convincing evidence that inflation is coming down. We don’t believe that just a private jobs report is enough for them to change their mind.

In our view, this is an excellent report. Despite a slowdown, adding 320k jobs when the unemployment rate is falling to 3.5% is nothing but positive. However, the fact that wages are expected to slow may add some validity to the view expressed in the minutes of the latest FOMC meeting that inflation is not expected to worsen.

Overall, we believe that such numbers are a double-edged sword. On the one hand, the positive jobs growth and unemployment rate numbers could ease fears over a potential slowdown, thereby allowing some dollar buying. The Fed could continue tightening without being afraid of causing a recession.

On the other hand, slowing wages on a YoY basis could prompt some to sell as this may be seen as another sign of inflation cooling somewhat in the next months. Thus, more participants may become convinced that the Fed may need to pause, or at least slow, its hiking process after summer.

So, this and the previous hawkish remarks by Fed officials are likely to keep the US dollar relatively supported. If we see a big miss compared to the current forecasts, the US dollar is very likely to slide.

traded notably higher yesterday after hitting support near the 1.0640 zone, which was already marked as a support by the inside swing high of May 5. Yet, it remains below the 1.0790 area, marked by the prior peak, formed on May 30, below the last upside support line taken from the low of May 13. Thus, we would still see chances for the bears to jump back into action again.

On the upside, we would like to see the recovery extending above 1.0845 before examining whether the bulls have regained full control. This could signal the rate’s return above the aforementioned upside line, and we may see the bulls pushing towards the 1.0935 zone, which acted as a key resistance between Apr. 6 and 21. If they don’t stop there, we may see them climbing towards the 1.1025 area, or even the 1.1140 territory, marked by the high of Mar. 17.

also traded higher after hitting support at 1.2470, a support already marked by the low of May 24. However, the pair remains below the downside line taken from the high of Mar. 23, and as with EUR/USD, we see decent chances for the bears to retake charge soon.

On the upside, we would like to see a clear and decisive break above 1.2775 before we get confident in the bullish case. This could confirm the break above the downside line taken from the high of Mar. 23 and may encourage advances towards the 1.2975 zone, which provided strong support between April 8th and 19th. A break higher could encourage more bulls to join in, which could help the pair hit the 1.3150 level, defined as a resistance by the high of Apr. 14.

Dollar edges lower ahead of U.S. job data By Reuters

Elon Musk’s ‘super bad feeling’ about the economy By Reuters

What It Means For U.S. Stocks To Be In A Bear Market