Is A Recession Is Coming…Again?

NFIB signals a recession is coming…again. The reason I say “again” is because, in September 2019, we discussed these same signals stating:

“Today, we once again see many of the early warnings. If you have been paying attention to the trend of the economic data, and the yield curve, the warnings are becoming more pronounced.

In 2007, the market warned of a recession 14-months in advance of the recognition.

Today, you may not have as long as the economy is running at one-half the rate of growth.”

Today, we see many indications of economic risk, or as noted in “Economic Hurricane,” storm clouds are clearly on the horizon. To wit:

“The most recent CEO Confidence Index suggests that most leaders are concerned about the economy over the next few quarters.”

We also noted it wasn’t just the leaders of major corporations worrying about the state of the economy over the next few quarters. With running above 8%, consumers are much less confident about their state of affairs. 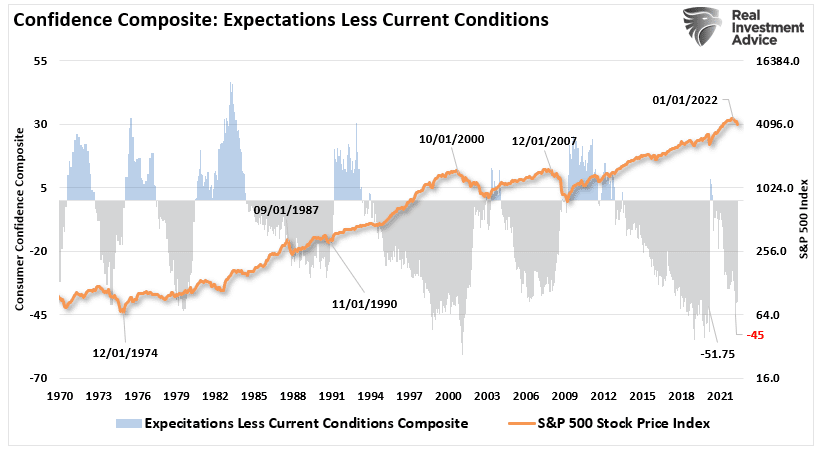 The latest National Federation of Independent Businesses monthly also supports the concern of an economic recession.

What Is The NFIB?

While the mainstream media overlooks the NFIB data, it really shouldn’t. 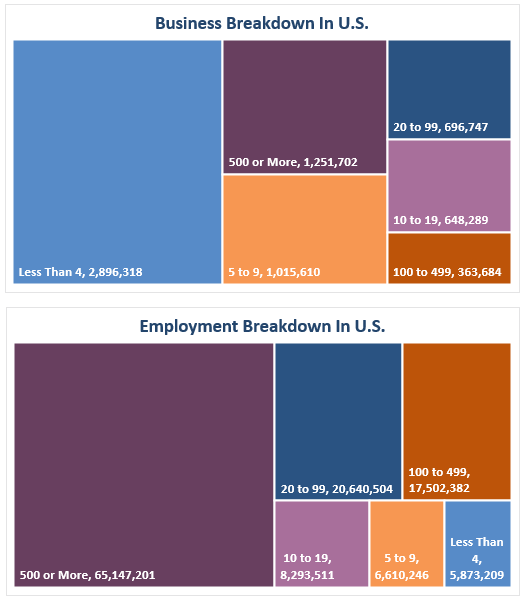 Simply, small businesses drive the economy, employment, and wages. Therefore, what the NFIB says is highly relevant to what is happening in the actual economy versus the headline economic data from Government sources.

In April, the survey plunged to 93.2 from a pre-COVID high of 108.8. Historically, a reading below 100 is a recessionary warning. 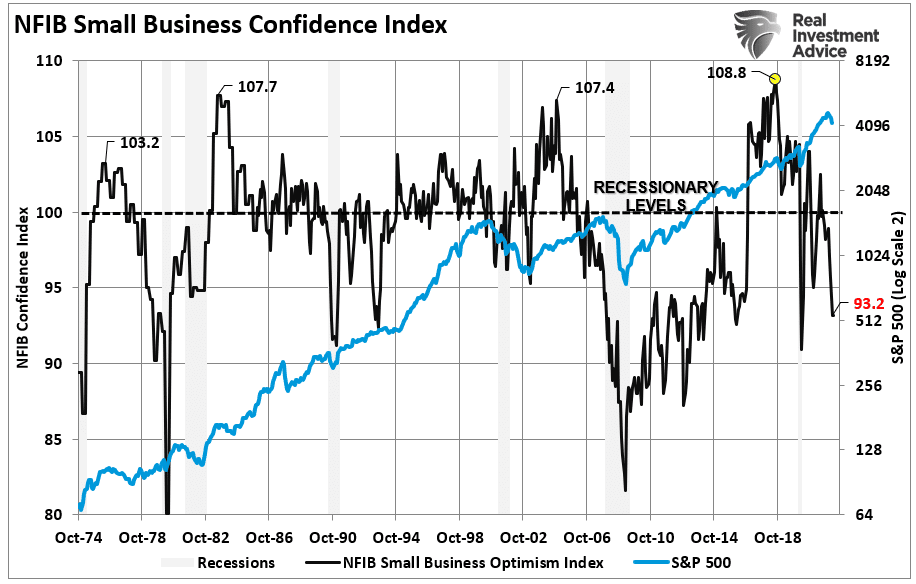 It is also important to note that small business confidence is highly correlated to changes in, not surprisingly, small-capitalization stocks. The stock market and the NFIB signals risk are rising. As noted by the NFIB:

Notably, the NFIB is a “sentiment” based survey like many surveys. Such is a crucial concept to understand.

“Planning” to do something is a far different factor than actually “doing” it.

For example, the survey stated that 20% of business owners are “planning” to increase employment in the next quarter. That sounds very positive until you look at the actual employment changes. In other words, “planning” to hire and committing to those costs are very different. 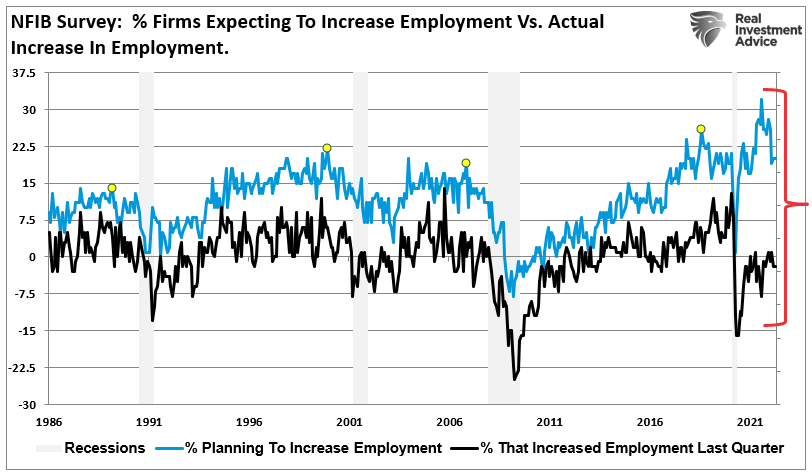 Such is especially the case when you compare their “plans” to the outlook for economic growth.

“Business investment” is a crucial component of the GDP calculation. Small business “plans” to make capital expenditures, which drive economic growth, have a high correlation with Real Gross Private Investment. While business investment remains elevated, it will decline as more firms opt to conserve cash as the economy slows. 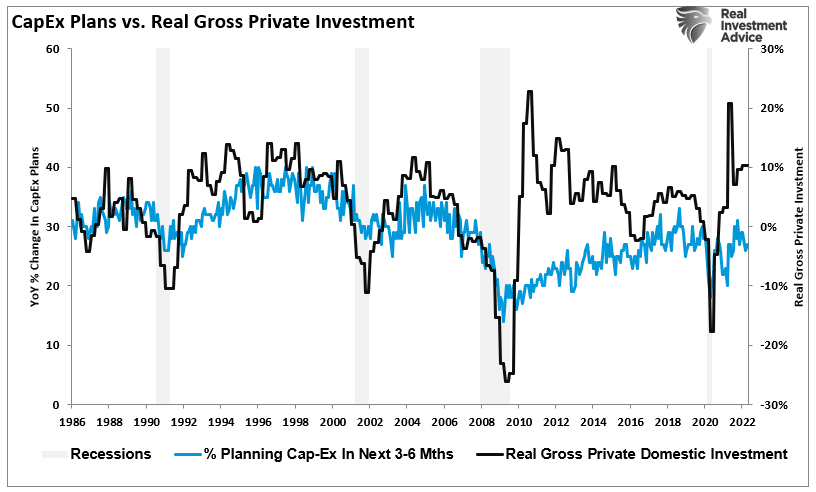 As I stated above, “expectations” are very fragile. The “uncertainty” arising from inflation, Russia/Ukraine war, and tighter monetary policy will weigh on business owners.

If small businesses were convinced that the economy was “actually” improving over the longer term, they would increase capital expenditure plans. However, the NFIB signals just the opposite.

The linkage between the economic outlook and CapEx plans is confirmation that business owners are concerned about committing capital in an uncertain environment. In other words, they may “say” they are hopeful about the “economy,” but they are just unwilling to ‘bet’ their capital on it.

Such is easy to see when you compare the survey’s economic outlook to economic growth. Not surprisingly, there is a high correlation between the two, given that business owners are the “boots on the ground” for the economy. Notably, their current outlook does not support the idea of more robust economic growth into year-end. 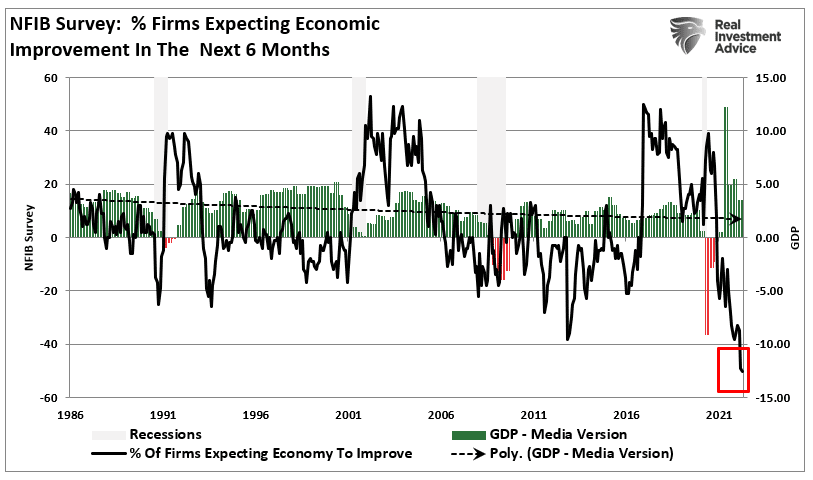 NFIB-Expectations Of Economic Growth Vs GDP

Of course, the Federal Reserve remains NO help in instilling confidence in small business owners to deploy capital into the economy. As NFIB’s Chief Economist Bill Dunkleberg stated:

“The Fed announced a rate hike of half a point this month with more hikes to come in future meetings. Under Paul Volcker, the Fed’s rate hit 20 percent, a long way from where we are today. If, historically, the Fed’s rate needs to be above inflation to be effective, we have a long way to go and the Fed is way behind the curve.”

That certainly isn’t going to convince small business owners to commit capital, particularly when they are already concerned about a recession.

“Predictions have a recession starting as early as the third quarter of this year, although most guesses have 2023 for the start. Owners are very pessimistic about sales and business conditions in the second half of the year. This dampens capital investment and, eventually, will feed into employment if sales actually slow as expected.” – NFIB

Employers do not hire just for the sake of hiring. Employees are one of the highest costs associated with any enterprise. Therefore, hiring takes place when there is an expectation of increased demand for a company’s product or services. 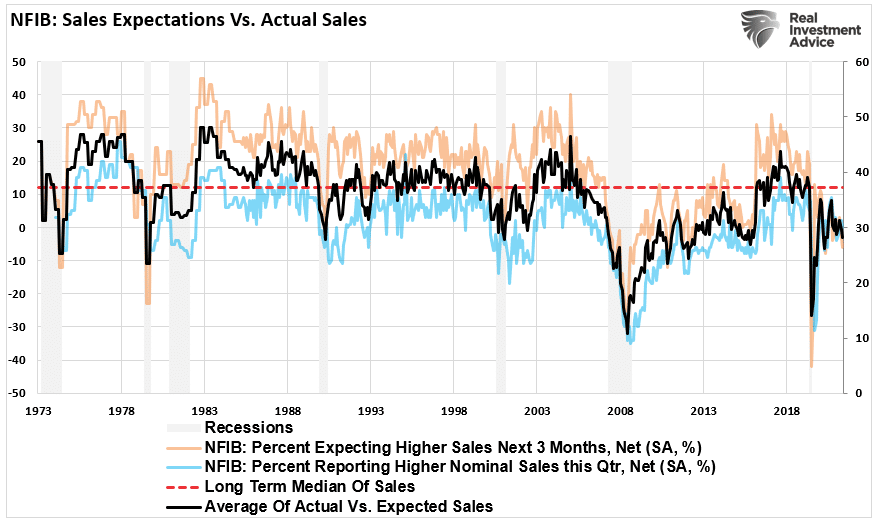 Furthermore, the decline in actual and expected sales corresponds with the reversion of real retail sales as consumers slow consumption due to surging inflation. 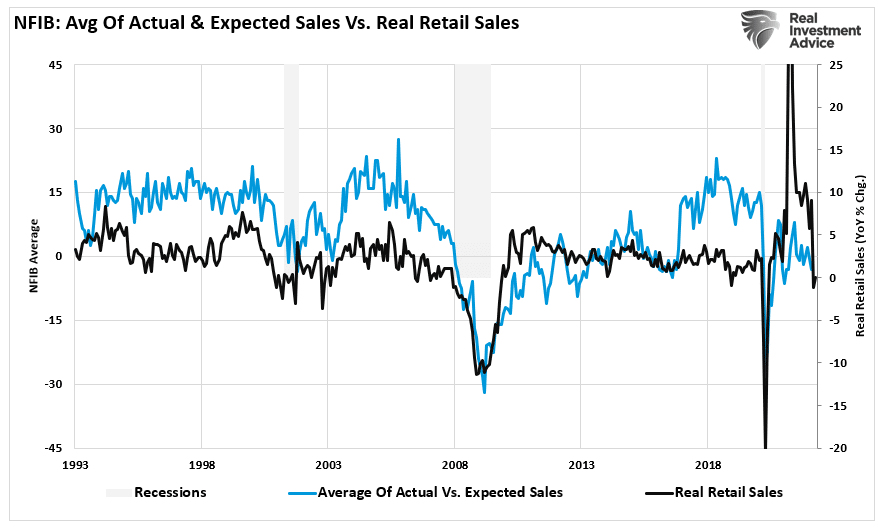 Lastly, despite hopes of continued debt-driven consumption, business owners face actual sales at levels more generally associated with the onset of a recession.

With small business optimism waning currently, combined with many broader economic measures, it is not surprising the NFIB signals many owners are worried about a recession.

No Recession In Sight?

It is readily apparent that “recession” risks are rising. One of the best leading indicators of a recession is “labor costs,” which, as discussed in the report on “Cost & Consequences Of $15/hr Wages,” is the highest cost to any business.

When those costs become onerous, businesses raise prices, consumers stop buying, and a recession sets in. So, what does this chart tell you? 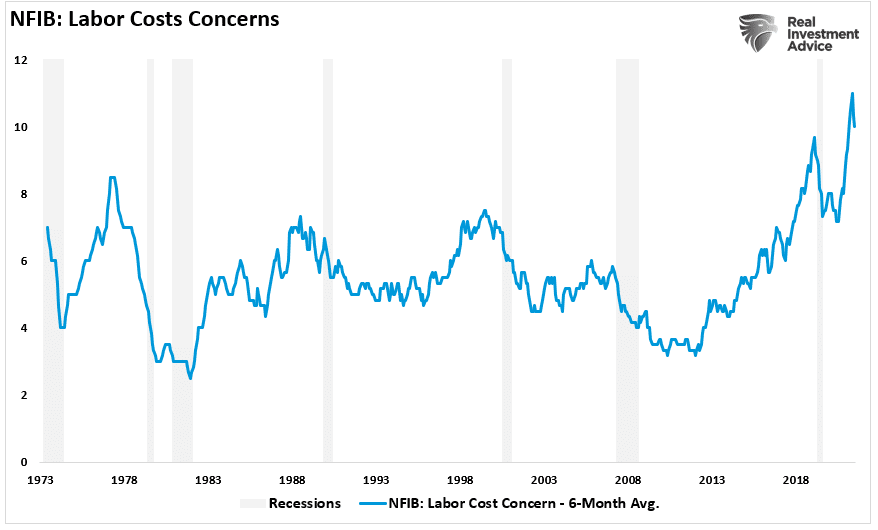 No one knows the timing of the recognition of the next recession. However, with economic growth slowing, the Fed hiking rates, and inflation weighing on consumers, I suspect we are closer than many think.

The last time the NFIB Signals were this weak, the Government started sending checks to households, and the Fed introduced $120 billion in monthly “QE.” Furthermore, interest rates fell to 0.5% as the Fed scrambled to buy junk bond ETFs.

I wonder how much longer the Fed will keep playing a “game of chicken” with the markets before one of them blinks.

My suspicion is the Fed will eventually cave.

US petrol demand shows signs of easing after record price…