Investors Lock Their Gaze On The ECB Decision

traded lower yesterday, while the was the main gainer among the major currencies, perhaps due to the upside revision in the Euro-area encouraging investors to add to bets of more aggressive action by the ECB.

The ECB today, and although no action is expected with regards to interest rates, participants may be on the lookout for hints and clues over how the Bank plans to move in the months to come.

The traded higher against all but one of the other major currencies on Wednesday and during the Asian session Thursday. It gained the most against , , and , while the only currency against which it lost was EUR.

The weakening of the Japanese yen and the Swiss franc suggests that markets may have traded in a risk-on fashion, but the strengthening of the dollar points otherwise.

Given that monetary policy divergence is the main market theme nowadays, we believe that a weak yen, a strong dollar, and a stronger euro, mean that investors have started adding to bets over higher interest rates by the ECB and the Fed, just a day ahead of the ECB meeting, and two days before the release of the US s for May.

This is negative for equities, and indeed, if we turn our gaze to the equity world, we see that all but two of the indices under our radar traded in the red yesterday and today in Asia.

The only exceptions were Spain’s and Japan’s . 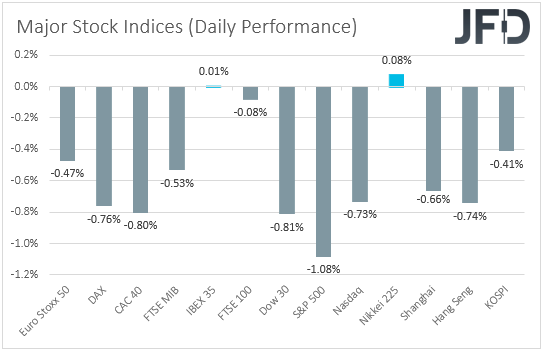 It seems that what may have prompted investors to add to their tightening bets, and especially with regards to the ECB, may have been the upside revision of the Euro area GDP for Q1, from +0.3% qoq to +0.6% qoq.

Although under normal circumstances this would be positive for European equities, this time around, it means that if the economy is not doing as bad as initially thought, the ECB could hike rates more aggressively in order to tame .

Today, the ECB is forecast to keep all three of its main interest rates untouched, but investors will lock their gaze on hints and signals with regards to how the Bank plans to move in the next few months.

A couple of weeks ago, President Christine Lagarde said that the ECB is likely to take its deposit facility rate out of the negative territory by the end of September and could lift it further if needed.

Given that the deposit rate is at -0.50%, we initially believed that this means two quarter-point liftoffs, one in July and one in September, and actually, some other ECB officials also supported that view. 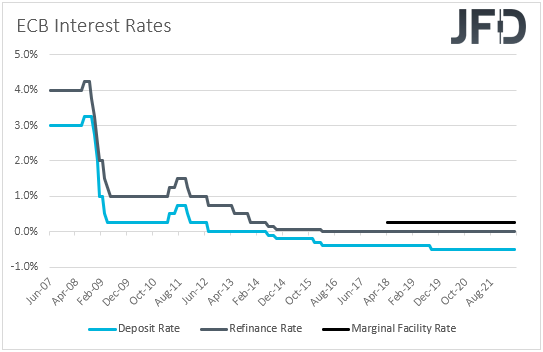 This may have sparked speculation of more aggressive action by the ECB, perhaps that the size of the July hike may be 50bps. Even if the officials hike by 25bps in July, they could hint a bigger increase for September. The view for the deposit rate rising 75bps by September has strengthened even further after yesterday’s GDP data.

A hawkish narrative by policymakers could help the euro recover some more ground, especially against currencies the central banks of which are expected to stay ultra-loose, like the yen.

However, with expectations becoming more and more hawkish lately, the risk for a disappointment has risen, and anything serving doubts over what the market currently anticipates, could result in a slide in the common currency, and maybe a rebound in European equities, as this would mean lower borrowing costs for companies for longer.

The war in Ukraine is still a risk for the Euro area economy, and that may be a rational reason for policymakers to choose a more careful strategy with regards to interest-rate liftoffs.

Even if they sound hawkish today and the euro rises, we doubt that it could keep outperforming its US counterpart for long, especially after several Fed officials expressed the view that they are not in support of a break in rate hikes after summer, at least at the moment and with the data they have in hand.

After all, the US economy is in better shape than the Eurozone, which could allow Fed officials to keep delivering double hikes, despite some worries over an economic slowdown recently. In order to start examining the case of larger advances in EUR/USD we would like to have clearer and more convincing evidence that inflation in the US is easing and headed back towards the Fed’s 2% target. The US CPI data for May, due out tomorrow, may be a good starting point.

The traded lower yesterday and today in Asia, but with the price remaining above the prior downside resistance line drawn from the high of Jan. 5.

As long as this is the case, we would see decent chances for that line acting as a support soon, resulting in a rebound.

The rebound may come from the crossroads of that line and the 3747 level, marked by the low of June 1, and may result in another test near the 3850 area, which provided support on May 30 and June 6.

A break higher would confirm a forthcoming higher high and may see scope for extensions towards the high of Apr. 21, at 3955, or even the peak of Mar. 29, at around 4025.

On the downside, we would like to see a clear dip below 3630, the low of May 25, before we start examining whether the bears have taken the driver’s seat.

EUR/USD edged higher on Wednesday, but the advance was stopped near the downside resistance line drawn from the high of Feb. 10. Overall, the rate remains below that line, but within a sideways range, with the lower end being the 1.0625/50 zone, and the upper bound being the 1.0765/88 territory.

With that in mind, we will adopt a flat stance for now.

A clear break below 1.0625, which is the low of June 1, could signal the continuation of the prevailing downtrend, and may initially target the low of May 20, at around 1.0535.

If that barrier doesn’t hold, then we may experience extensions towards the low of May 18, near 1.0456.

On the upside, we would like to see a clear break above 1.0788, the high of May 30, before we assume that the bulls have gained full control, at least for a while.

The rate will already be above the downside line taken from the high of Feb. 10, and the next stop may be high of Apr. 22, at around 1.0845. Another break, above 1.0845, could carry larger advances, perhaps paving the way towards the peak of the day before, at around 1.0935.

Dollar, Euro Stabilize Ahead of ECB Meeting By Investing.com