The , the , and the were the main losers among the majors yesterday and today in Asia. This suggests a risk-off trading activity, and indeed almost all indices under our radar finished their sessions well in the red.

Expectations of aggressive tightening by some major central banks may continue to be a driver. Still, investors may also be concerned about slowing growth and even recession risks in big economies like China.

The traded mixed against the other major currencies on Monday and during the Asian session Tuesday. It gained versus AUD, CAD, and NZD, in that order, while it underperformed versus , , and . The greenback was found nearly unchanged against .

The weakening of the risk-linked Aussie, Kiwi and Loonie, combined with the fact that the yen managed to gain against the greenback, suggests that financial markets may have traded in a risk-off manner yesterday and today Asia.

Indeed, turning our gaze to the equity world, we see that major European and US indices traded well in the red, with Europe averaging a 2.50% slide and Wall Street a 3.16% fall. As is usually the case, lost the most. The negative appetite rolled over into the Asian session today as well. 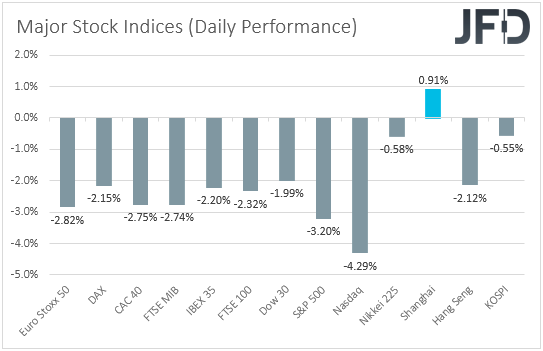 The fact that NASDAQ lost the most, in our view, suggests that investors maintained their bets over aggressive tightening by the Fed and some other major central banks. However, the probability of a triple hike by the Fed in June has fallen dramatically. This may be because Atlanta Fed President Raphael Bostic said he expects they will deliver two or three more double hikes. Still, they will not need to use anything bigger.

Remember that Fed Chair Powell downplayed that prospect at the latest gathering, but the following days showed that investors were not convinced. Now, Bostic may have turned them more skeptical on that front. That’s maybe why the dollar did not gain against all the other majors today. According to the CME FedWatch tool, there is only a 10% chance for a 75bps hike, while the rest 90% is assigned to another 50bps.

However, we stick to our guns that even with that, the Fed remains among, if not the most hawkish major central bank, and thus, we would expect the US dollar to continue outperforming currencies the central banks of which are expected to follow a much slower and smoother tightening path.

But if this is the narrative, why did the yen strengthen yesterday? After all, the BoJ remains ultra-dovish. The yen may have seen some buying activity due to growing fears of a slowdown and even a recession in China, as Shanghai and Beijing tightened their COVID-related curbs on Monday. We see it as a flight to safety.

As for today, the release on which we will place extra emphasis, despite not being a major market mover, is the German ZEW survey for May. Both the and indices are forecast to have slid further into the negative territory, intensifying concerns over the performance of the German economy and the Euro area as a whole, something that could also prompt participants to scale back their bets over a summer rate hike by the ECB.

If so, the euro is likely to drift lower, especially against the all-mighty greenback, with EUR/USD perhaps falling below the key support zone of 1.0470/90 and entering territories last seen in January 2017. If that break doesn’t happen today, we see ample chances for it to materialize in the aftermath of the , due out tomorrow, in case they beat their estimates. 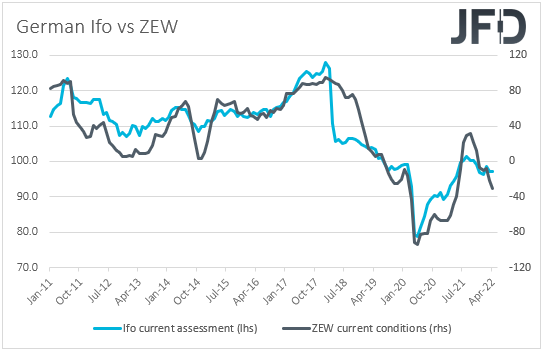 The kept sliding yesterday, with the cash index hitting support at 3965 overnight. Overall, the index remains well below the downside resistance line drawn from the high of Mar. 29, with yesterday’s fall confirming a forthcoming lower low after overcoming the 4065 zone, marked by the low of May 2. In our view, this keeps the short-term outlook negative.

Yes, the overnight rebound may continue for a while more, but we see decent chances for the bears to jump back into the action soon, perhaps after they test the 4065 barrier as a resistance this time. A new slide could take the price below 3965, with the following support being at around 3885, a zone which provided support between Mar. 19 and 26. If the bears are not willing to stop there either, we may see them driving towards the low of Mar. 8, at 3795.

We would like to see a strong recovery back above the 4370 zone to start examining the bullish case. This may confirm the break above the aforementioned downside line and may initially target the 4460 barrier, which provided resistance on Apr. 14.

If that hurdle is also broken, then we may see advances towards the peak of Apr. 8, at 4525, the break of which could carry extensions towards the high of Apr. 5, at 4595.

EUR/USD edged up yesterday after hitting support at 1.0490. Since Apr. 27, most of the price action has been within a sideways range between that barrier and the 1.0595 resistance. However, in the bigger picture, EUR/USD remains below a tentative downside resistance line taken from the high of Mar. 31. Thus, even if the rebound continues above the upper end of the short-term range, we still see chances for the bears to recharge below that line.

This could happen near the 1.0655 zone, from where a slide may result in another test at 1.0490 or at 1.0470, marked by the low of Apr. 28. A break lower would confirm a forthcoming lower low on the daily chart. It may encourage more bears to join in, perhaps taking action down to the 1.0355 territory, which provided strong support in December 2016 and January 2017.

On the upside, we would like to see a clear break above 1.0760 before we start examining a bullish reversal. This could confirm the break above the tentative downside resistance line and may initially target the 1.0845 barrier, marked near the high of Apr. 22. If the bulls are too excited to stop there, then a higher break could lead the rate to the peak of the day before, at 1.0935.

As for the Rest of Today’s EventsThe only other release worth mentioning is the weekly API report on . Still, as is always the case, there is no forecast available.

More than a third of AMC online payments are crypto or…