Yesterday, the European indices showed weakness, closing their trading sessions in the red, as concerns over the slowing economic growth continued to worry investors. Initially, the U.S. indices followed their European counterparts’ footsteps yesterday. However, just roughly an hour before the closing bell, they climbed back into positive territory and ended their sessions in the green. Twitter’s (NYSE:) board accepted Elon Musk’s offer.

Yesterday, the European indices showed weakness, closing their trading sessions in the red, as concerns over the slowing economic growth continued to worry investors. The wrong signals started coming from China, as the country is battling one of its worst cases of a covid outbreak.

Market participants believe that this issue could cause global supply shortages of certain goods, leading to a further acceleration of inflation. Even yesterday’s better-than-expected , which showed up 91.8 against the forecasted 89.1, could not lift the spirit of some investors in Europe.

Emanual Macron’s presidential victory, which was supposed to be seen as a positive outcome for the European market, was overshadowed by the Chinese problem.

Initially, the U.S. indices followed the footsteps of their European counterparts yesterday, however, just roughly an hour before the closing bell, they have managed to climb back into positive territory and end their sessions in the green.

Communication services, technology, and consumer cyclicals were the best performing sectors in the U.S. yesterday. The worst performing ones were energy, basic materials, and utilities.

Twitter took center stage, gaining 5.66% after reports started coming out that a deal between the company and Elon Musk might be reached by the end of Monday. And indeed, before the market close, the Twitter board accepted Musk’s offer to buy the company for $54.20 per share and eventually take it private.

A lot of speculation surrounds this deal as to whether it was a hostile takeover. Twitter’s board denied this allegation. Twitter will be releasing its on Apr. 28, and analysts are not expecting great results.

If that’s the case, this might have played in favor of selling the company to Mr. Musk. The Tesla (NASDAQ:) CEO is planning to inject billions of USD into Twitter to revive it. He said in a tweet,

“Enhancing the product with new features, making the algorithms open source to increase trust, defeating the spambots, and authenticating all humans.”

Earnings And Other Economic Data

Yesterday, in the currency world, the  stayed strong against its major counterparts. However, the stronger one was still the , which kept its safe-haven status as equities took a beating. The worst performers were and .

continues to trade above a short-term tentative upside support line taken from the low of Apr. 12. At the time of writing, the pair is flirting with one of its key resistance barriers, at 0.9597. Although there is a good chance we might see a further move north, we would still prefer to wait for a breakout above that 0.9597 hurdle first.

Alternatively, a break of the aforementioned upside line and a rate drop below the 0.9546 zone, marked by yesterday’s low, may signal a change in the direction of the current short-term trend. More bears could step into the field, potentially dragging USD/CHF to the 0.9514 hurdle or the 0.9454 level, marked by the low of Apr. 20.

Today, market participants will be on the lookout for earnings reports from such tech giants like (NASDAQ:), (NASDAQ:) and (NASDAQ:).

In terms of economic data releases for today, Japan delivered its jobs numbers for March during the early hours of the Asian morning. The figure was expected to remain the same as previous, at 2.7%. The actual number came out at 2.6%. 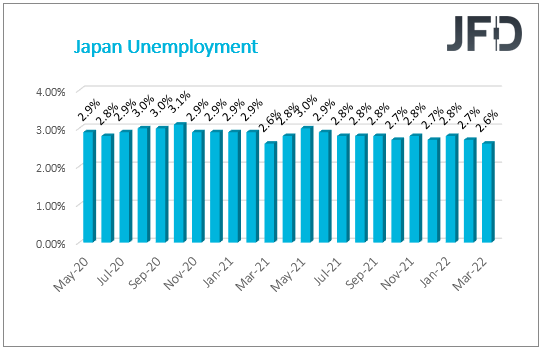 Overall, is on a decline, as it continues to form lower lows after reversing to the downside in the middle of last week. The rate is also trading well below a short-term tentative downside resistance line drawn from the high of Apr. 20.

Yesterday, the pair found a strong support near the 200 EMA on our 4-hour chart and near the 84.11 zone, from where it rebounded somewhat. A break below that zone is needed to get comfortable with further declines.

A break below the 84.11 hurdle will confirm a forthcoming lower low, possibly opening the door towards the 83.70 zone, marked by the low of Mar. 23. If the slide continues, the next support target could be at 82.52. That area is marked by the high of Mar. 21.

To consider a corrective move higher, we would prefer to wait for a push above the current highest point of today, at 85.14. This way, a few more buyers might get interested and join in the action, potentially driving NZD/JPY towards the 85.86 obstacle, or to the 86.86 level. That level marks the inside swing low of Apr. 20.

There won’t be any significant data sets from Europe, however, from the U.S., we will receive the core MoM for March, together with the numbers. The are believed to have improved from -0.6% to +0.6%.

However, the new home sales number is expected to decline slightly, from 772k to 765k. Also, the U.S. will release its figure for April. That figure is believed to have improved slightly from 107.2 to 108.0.

As For The Rest Of Today’s Events

The U.S. will deliver its for March on an MoM and YoY basis. Currently, there are no available forecasts for those two indicators.

Iran and EU herald fresh talks to revive nuclear accord in…

Brazil: how far will Bolsonaro go to win re-election?