The economic agenda becomes a bit heavier this week as three major central banks are scheduled to announce their monetary policy decisions: the Fed, the BoE, and the RBA. All of them are expected to lift rates, and thus, the attention is likely to fall on their hints and signals concerning their future course of action.

On the data front, the most important releases are the New Zealand, US, and Canadian employment reports. On Monday, the Chinese and UK markets stayed closed to celebrate the Labor Day holiday, with China expected to stay closed until Wednesday.

In terms of economic data, Monday’s agenda appears relatively light. We get the final manufacturing PMIs for April from the and the , and as it is always the case, they are expected to confirm their preliminary estimates.

The only release that could attract some attention is the for the month, which is expected to have inched up to 57.6 from 57.1, confirming that the US economy is in a much better shape than its major counterparts, and adding credence to expectations over aggressive tightening by the Fed.

On Tuesday, during the Asian session, the on its own monetary policy. The consensus is for a rate hike to 0.25% from 0.10%, something also confirmed by the ASX 30-day interbank cash rate futures yield curve.

Thus, with that in mind, a rate hike by itself is unlikely to prove very supportive for the . If officials indeed push the liftoff button, attention is likely to quickly turn to the accompanying statement for clues and hints over the Bank’s future course of action.

According to the aforementioned yield curve, market participants expect interest rates to hit 2.5% by the end of the year. Still, up until now, the RBA itself has not confirmed such aggressive expectations. Thus, putting such pricing at rest could lead to a slide in the Australian currency.

For the Aussie to gain in the aftermath of the decision, the Bank’s language may have to support the aforementioned market pricing, something we see as unlikely. One of the reasons we say that is because Australia is an export-oriented nation, and it may not want to risk hurting its exports by fueling a near-term solid uptrend in the Aussie.

Apart from Chinese markets, Japan will also stay closed on Tuesday due to Constitution Day. As for the rest of the day, the only data worth mentioning are the German for April, the UK’s final for the same month, and the US’s for March.

Chinese and Japanese markets will stay closed on Wednesday, but the Asian calendar is not empty. We do have New Zealand’s employment report for Q1 and Australia’s for March. In New Zealand, the is expected to have stayed unchanged at 3.2%, and the net employment change shows that the economy has continued to add jobs at the same slow pace as in Q4 last year.

The though is expected to have risen further, to 3.1% YoY from 2.8%, which could add to speculation of further acceleration in inflation and thereby revive some speculation over more rate hikes by the RBNZ.

Remember that the RBNZ lifted rates by 50 bps at its latest gathering but hinted that it hiked more now so it can slow down later. As for Australia’s retail sales, the forecast points to a slowdown to +0.5% mom from +1.8%. 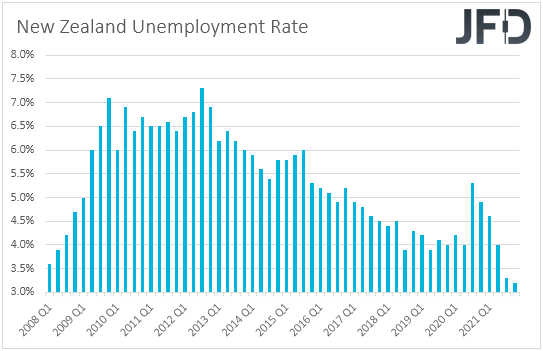 Later in the day, the spotlight is likely to fall on the . The financial community is widely anticipating a 50 bps rate hike. Thus, if this is the case, the attention is likely to quickly turn to the accompanying and the by Fed Chair Powell for new information about the future rate path. 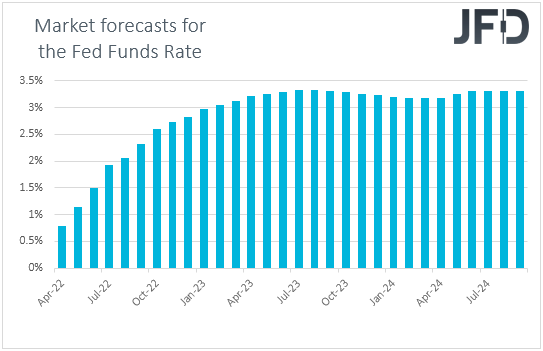 Hawkish remarks by several Fed officials, including Fed Chair Powell, have prompted investors to fully price in a double hike for this meeting and a triple one in June. They even anticipate another 50 bps to be added in July, with a 15% chance of a back-to-back triple hike.

That’s overly hawkish, and thus, the meeting statement and the press conference have to match that for the to spike higher. Anything suggesting that the financial community is too aggressive may result in a decent setback.

Having said all that though, even if this is the case, as long as the Fed is expected to continue tightening at a faster pace than other major central banks, the US dollar is very likely to rebound again and continue its prevailing uptrend.

The Japanese market will stay closed on Thursday due to Children’s Day, with the first release during the European morning being Switzerland CPI for April. The is forecast to rise somewhat, to +2.6% from +2.4%, but it is unlikely to tempt SNB policymakers to change their mind about monetary policy.

The main event of the day though is likely to be the . This will be a Super Thursday for the UK in terms of monetary policy, as besides the decision, the statement, and the meeting minutes, we also get the quarterly report and a press conference by Governor Andrew Bailey.

At its latest meeting, this bank decided to lift rates by another 25 bps, as was widely expected. However, what came as a surprise was the 7-1 voting, with the dissenter calling for no increase at all.

Remember that officials lifted rates by 25 bps at the February gathering, but the vote was 5-4, with the dissenters calling for a 50 bps increase. Compared to that, March’s decision suggests a more cautious approach. 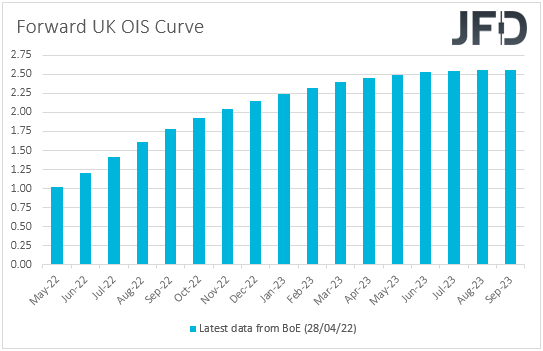 The consensus for this gathering is for another 25 bps liftoff, but this time, market participants see the case for two officials dissenting and favoring standing pat. If this is the case, the market reaction will likely come from the statement, the minutes, and especially the inflation report.

Updated inflation and growth forecasts and rate-path projections could well signal whether investors’ expectations are reasonable or not. According to the forward curve of the OIS (Overnight Index Swaps), investors see interest rates climbing to near 2.25% by year-end.

So, anything more hawkish, or just confirming that could support the , while the opposite may be true in case the Bank’s projections are more cautious. Bearing in mind the relatively cautious stance the Bank adopted last time and the expectations around two dissenters, we see the latter case as more likely.

Finally, on Friday, investors are likely to turn their gaze to the employment reports for April from the US and Canada. Getting the ball rolling with the US, are expected to have slowed somewhat, to 380k from 431k, but the is expected to have ticked down to 3.5% from 3.6%.

are forecast to have increased at the same monthly pace as in March, but this will result in a downtick to +5.5% from +5.6% in the . 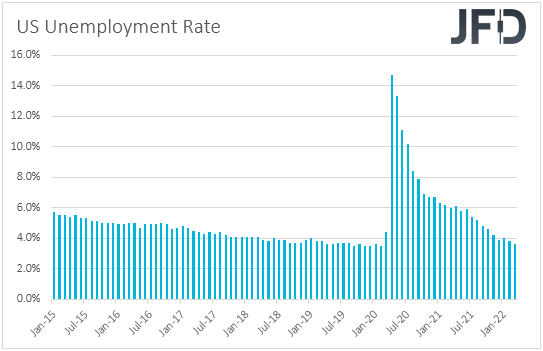 Conditional upon the Fed hiking by 50 bps on Wednesday and staying in the course for more sizable increments, we see the case of such numbers adding more credence to that view, despite a slight slowdown in payrolls and wages.

In other words, conditional upon the US dollar maintaining its uptrend on Wednesday, we expect it to stay in that course after the employment report. Now, flying to Canada, the is forecast to slide to 5.2% from 5.3%, and the net change in employment to slow somewhat, to 57.5k from 72.5k.

At its latest gathering, the BoC decided to hike rates by 50 bps, noting that interest rates will need to rise further. Governor Macklem specifically said,

“We need higher rates, and the economy can handle them. We are prepared to move as forcefully as needed to get inflation on target.” 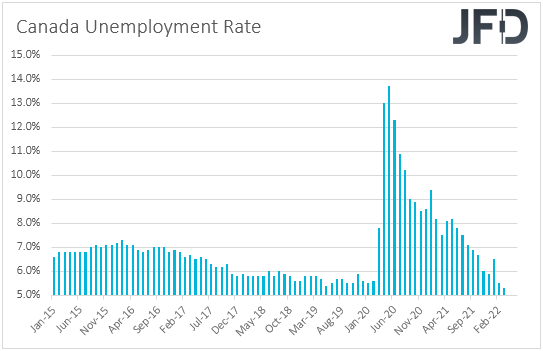 With that in mind, and also taking into account that inflation accelerated by much more than expected in March, we believe that a decent employment report could add more support to the , especially against currencies the central banks of which are expected to stay dovish or proceed in a much more cautious manner than the BoC in normalizing their policy.

Nonetheless, due to the aggressive expectations surrounding the Fed, we don’t expect the Loonie to outperform the US dollar as well. We believe that there is still some more upside for USD/CAD. As for the rest of Friday’s events, during the Asian session, we get the for April, while during the European trading session, the UK for April is due to be released.

Crypto-associated stocks hammered as COIN and HOOD drop to…

Used-car retailer Carvana to lay off about 12% of workforce…