Market expectations are firmly behind a fourth consecutive 75bp interest rate hike from the Federal Reserve next week. The key story is whether the Fed opens the door to a slower pace thereafter or if the hawks’ focus on core inflation momentum signals a fifth 75bp move in December

Markets On Board For Another 75bp Hike

A fourth consecutive 75bp rate hike from the Federal Reserve looks like a done deal for next week’s Federal Open Market Committee (FOMC) meeting. After all, core inflation readings are heading higher rather than lower, the economy has returned to growth after two consecutive quarters of falling GDP, while job creation continues apace with job vacancies exceeding the number of unemployed Americans by four million. The Fed continues to believe inflation risks are “weighted to the upside”, that ongoing rate hikes are “appropriate” and that a “sustained period of below trend growth” is required to get inflation under control. Unsurprisingly, 75bp is fully priced by financial markets.

A 50bp hike is predicted by a tiny minority of analysts, a view that got some traction following recent comments from a couple of doves on the committee about the perceived risks of over-tightening policy and creating an unnecessarily deep recession. However, the general view is that this is more of a story regarding the size of rate hikes at subsequent meetings. Still, it certainly dampened any talk of a 100bp rate rise. No analyst is forecasting such an outcome based on consensus survey responses, unlike at recent meetings. 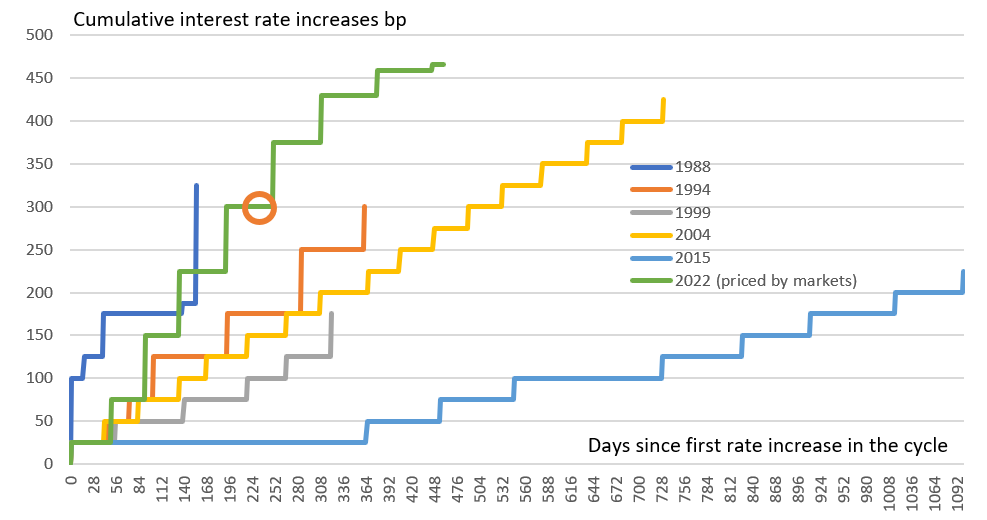 Fed Could Hint At A Slower Path Ahead

The market had been favoring a fifth consecutive 75bp hike at the December FOMC meeting up until late last week. However, a Wall Street Journal article last Friday by Nick Timiraos, who has gained a reputation as the Fed’s go-to guy when “senior management” want to guide the market more directly, helped alter the balance of thinking. His article hinted that some officials are concerned that things were moving too fast too quickly and they need to rein the market back a bit, which has re-opened the possibility of “just” a 50bp hike in December.

This was followed by comments from San Francisco Fed president Mary Daly, echoing sentiments from Fed governor Chris Waller that the Fed is “thinking about a step down [in the pace of hikes], but we’re not there yet”. Smaller rate hikes from Canada and Australia have added to a sense that bankers are looking to tone down the aggressiveness.

As Fed chair Jerome Powell has repeatedly admitted, monetary policy works with “long and varied lags” and after having hiked rates 375bp, it might soon be time to stop battering the economy so aggressively. The speed with which Treasury yields, mortgage rates and other borrowing costs have been rising in the economy is causing some economic stress, most notably in the housing market, but there is also concern that financial stresses could potentially be brewing in the system. Consequently, we do indeed expect the Fed to open the door to a slower pace through formal forward guidance, but it may not necessarily go through it.

Inflation Needs To Soften To Prevent A Fifth 75bp Hike

With inflation failing to behave as the Fed would like, the central bank is going to be reluctant to slow the pace of hikes until there is evidence that price pressures are moderating. The core CPI and PCE deflator continue to show prices rising 0.5% or 0.6% month-on-month, but to get inflation to trend toward the 2% year-on-year target we need to see month-on-month price changes of closer to 0.2%. So, while the recent commentary has offered some support to our current house view of a 50bp rate hike in December, the data doesn’t yet.

As such we have to keep the option open for a 75bp hike in December, even if the Fed language is a little softer next week. Indeed, the stickiness of inflation also suggests the risk is that our call for December to mark the peak (at 4.25-4.5%) is perhaps too early and it could be that we get a final 50bp in February that would then mark the top. This would leave a terminal rate of 4.75-5%.

The market discount for the terminal fed funds rate is very important for the trajectory of the 10yr Treasury yield. In the past week, that market discount has moved from 5% down to 4.8%. And if the Fed hikes by 75bp on 2 November, the effective funds rate will move up to 3.83%. That’s still some 100bp below where the market expects the effective fund rate to get to. The issue for the 10yr is whether that 100bp gets delivered. And if not, whether it over or undershoots the 100bp discounted. That’s where the direction for the 10yr yield will come from.

The other issue that will be interesting for the Federal Reserve is whether it decides to talk about market technicals. There is a running US$2.2tr going back to the Fed on the overnight reverse repo facility, reflective of an ongoing excess of liquidity in the system. Such is the size of that excess that the SOFR rate, effectively the general collateral rate, has been dragged down to the 3% area at times. It has even been below 3%, which is not a great look as the fed funds floor is 3%. The rate the Fed pays on the reverse repo window is 3.05%.

So far the Fed has viewed this through the prism of a facility that continues to do its job. That’s fair to a point. But during deeper moments of reflection, there must be a nagging feeling at the Fed that this is not an ideal set of circumstances, and a means to correcting this is through faster balance sheet run-off. Alternatively, the balance sheet run-off will ultimately cumulate to a point where it begins to materially impact the liquidity excess. But that will take some time; likely another few quarters.

A final point that the Fed may or may not opine on is its profit and loss account. Two issues here. First the performance of its bond portfolio. Clearly, it has seen a large capital loss so far this year, just as practically all bond portfolios have. Further rises in yields add to this negative performance. Second, it will be interesting to see whether the Fed addresses the rising price to be paid on excess reserves, which are compensated at the rate of 3.15% currently, and that likely goes up by 75bp in line with other rates. There has been minimal commentary on this from the Fed to date, but it’s certainly something that could be commented on, in line with the tiering discussions elsewhere.

FX Markets: Hyper-Sensitive To The Pivot

The goes into the October FOMC 3-4% off its highs of the year. The move has coincided with momentum towards the idea that the Fed might want to slow the pace of hikes – akin to what we have seen in Australia and more recently in Canada.

The big question for the market is whether Powell wants to use the press conference to discuss slowing the tightening cycle. Frankly, that is very uncertain and why we use the scenario approach above.

Making the case for the dollar staying relatively supported is: i) the market already prices the pivot to a 50bp hike in December and ii) the Fed knows how sensitive rate markets are to communication, where the European Central Bank saying it had made “substantial progress in withdrawing monetary accommodation” saw 30bp wiped off the pricing of the ECB cycle. Does the Fed really want to send that message?

As long as further hikes are coming – which seem likely unless core month-on-month inflation starts to fall sharply – we would expect the dollar to meet strong demand into any weakness. After all, the Fed is still battling with core inflation moving away from its year-end targets. And as real US interest rates push higher again into year-end, we would back the dollar making a return to the highs.

In terms of levels, we doubt sustains any gains over the 1.01/1.02 area and would favour 0.95 – perhaps lower for later this year. Huge FX intervention from the Bank of Japan should not stand in the way of returning to 150. And should push towards the 7.40 area despite sporadic attempts from policymakers to slow the move.

Disclaimer: This publication has been prepared by ING solely for information purposes irrespective of a particular user’s means, financial situation or investment objectives. The information does not constitute investment recommendation, and nor is it investment, legal or tax advice or an offer or solicitation to purchase or sell any financial instrument. Read more

Japan spent record $42.8 billion in October interventions to prop up yen By Reuters