Yesterday, the main event was the , with the bank opening the path to its first rate hike since 2011, to be delivered in July, and possibly a larger one in September. However, in the aftermath of the decision, the common currency tumbled on “fragmentation” fears, as President Lagarde did not provide details on how officials were planning to address the matter.

As for today, attention is likely to turn to the US CPIs for May, as investors are trying to figure out how the Fed plans to move forwards after summer. Canada’s employment report is also due to be released.

EUR Slides on Fragmentation Concerns; US CPIs, and Canada Jobs Report in Focus

The traded higher against all but one of the other major currencies on Thursday and during the Asian session Friday. It gained the most versus , , and , while it lost ground only versus .

The strengthening of the US dollar and the Japanese yen, combined with the weakening of the risk-linked Loonie and Aussie, suggests that the financial community may have traded in a risk-off manner.

Turning our gaze to the equity world, we see that European shares slipped ahead of the ECB decision. Investors avoid adding to their exposures due to high speculation that the bank will signal a stronger-than-previously-suggested rate path.

Indeed, the bank kept all three of its main interest rates untouched as was widely expected, and said it would hike rates next month, the first liftoff since 2011, followed by a perhaps bigger increase in September. This added credence to those seeing a 75bps increase by September, as it could mean a quarter-point hike in July and doubling that in September. That’s why we saw the euro initially rallying. 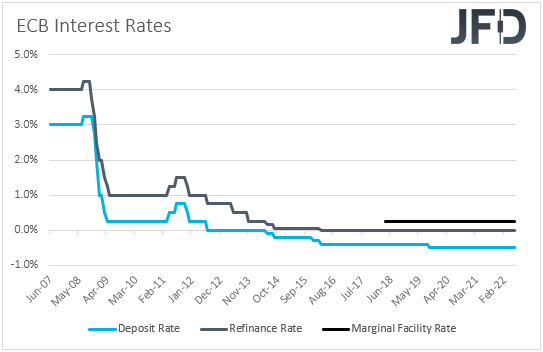 But why was it found among the three main losers this morning? The currency came under strong selling interest after ECB Christine President Lagarde referred to the problem of “fragmentation,” which refers to the divergence in the economic state and especially borrowing costs between different Eurozone countries. Still, she fell short of providing a clear road map on how they plan to address the issue.

She said they would adopt new instruments if needed, but she gave no further details. Investors may have become concerned that, although safe-haven Germany could handle higher interest rates, debt-laden countries, like Italy and Greece, could fall into recession. That’s maybe why we saw the euro falling so sharply in the aftermath of the decision.

Those economic concerns may have been the reason behind the slide in the safe-haven yen. Remember that the yen has been weakening rapidly until yesterday, even when stocks were sliding, but this was due to the substantial monetary policy divergence between the BoJ and other major central banks, like the Fed. Now that fears about economic growth have been revived, the currency wore its safe-haven suit. 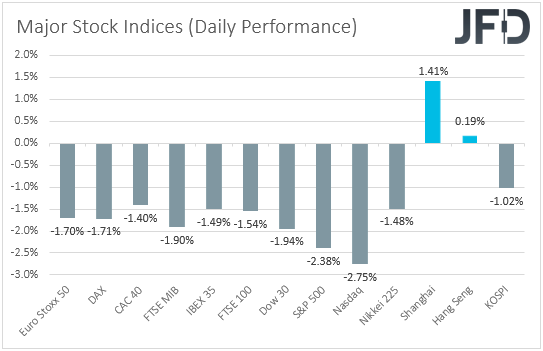 The negative sentiment continued during the US session. It was rolled over into Asia today, with investors anxiously awaiting the US CPIs for May, due out later today. The is expected to have held steady at 8.3% YoY, but the is seen declining to +5.9% from 6.2%. This could revive speculation over a post-summer pause, and if not a pause, a slowdown, in the Fed’s hike path. However, in our view, it is too early to say with certainty something like that.

After all, the Fed appears committed to delivering two more double hikes in June and July, and as for the subsequent meetings, we will get a lot more data before arriving at safer conclusions. Even officials themselves noted at their prior gathering, according to the minutes, that it is too early to be confident that inflation has already peaked.

So, we prefer to take things day by day. The dollar could slide somewhat in case of a slowdown in inflation, but on the first fresh sign that inflation could turn up again or on fresh comments dismissing the likelihood of a post-summer break by the Fed, the currency could turn up again.

EUR/USD spiked higher after the ECB decision but hit resistance within the 1.0765/88 zone, and then it came under strong selling interest, falling slightly below the key support zone of 1.0625/50. This kept the rate below the downside resistance line taken from the high of Feb. 10, and with the dip below 1.0625, it makes us believe that further declines are possible.

Another attempt below 1.0625, the low of Jun. 1, could signal the continuation of the prevailing downtrend and may initially target the low of May 20, at around 1.0535. If that barrier doesn’t hold, then we may experience extensions towards the low of May 18, near 1.0456.

On the upside, we would like to see a clear break above 1.0788, the high of May 30, before we assume that the bulls have gained complete control, at least for a while. The rate will already be above the downside line taken from the high of Feb. 10, and the next stop may be the high of Apr. 22, at around 1.0845.

Another break above 1.0845 could carry larger advances, perhaps paving the way towards the peak of the day before, at around 1.0935.

The cash index tumbled yesterday, falling below the key support (now turned into resistance) zone of 12440. In our view, this has signaled the exit out of the range the index had been trading since May 27, and thus, we would see chances for more declines.

The first territory to consider as a support may be at around 12080, which provided decent resistance between May 19th and 23rd, the break of which could carry declines towards the 11690 or 11505 areas, marked by the lows of May 25th and 20th, respectively.

On the upside, we would like to see a clear break above 12935 before we start examining a bullish outlook. This would confirm a forthcoming higher high on both the daily chart and may see scope for advances towards the 13545 territory, which provided strong resistance between Apr. 26 and May 4, or towards the 13745 barrier, which is marked by the low of Apr. 18.

If neither area can hold, then a break higher could extend the advance towards the high of Apr. 21, at around 14285.

As for the Rest of Today’s Events

Another top-tier data on the economic agenda today is Canada’s employment report for May. The is forecast to have held steady at 5.2%, while the is forecast to show that the economy has added 24.0k jobs, more than the 15.3k added in April.

At last week’s gathering, the BoC hiked by 50bps, its second double hike in a row, taking its benchmark rate to 1.5%. That said, this was largely anticipated and fully priced in. In our view, the most important takeaway from this gathering was that the bank reiterated its willingness to “act more forcefully if needed.” So, with that in mind, a decent employment report could allow the Loonie to recover some of yesterday’s lost ground.

What would Japan’s currency intervention to combat a weak yen look like? By Reuters

US lawmakers draw battle lines over search of Trump home