‘Don’t Fight The Fed.’ Unfortunately, that mantra has remained a ‘call to arms’ of the financial markets and media ‘bullish tribes’ over the last decade.

Armed with zero interest rate policy and the most aggressive monetary campaign in history, investors elevated the financial markets to heights only rarely seen in human history. Yet, despite record valuations, pandemics, warnings, and inflationary pressures, the ‘animal spirit’ fostered by an undeniable ‘faith in the Federal Reserve’ remain alive and well.

Of course, the rise in ‘animal spirits’ is simply the reflection of the rising delusion of investors who frantically cling to data points that somehow support the notion ‘this time is different.’ As David Einhorn once stated:

“The bulls explain that traditional valuation metrics no longer apply to certain stocks. The longs are confident that everyone else who holds these stocks understands the dynamic and won’t sell either. With holders reluctant to sell, the stocks can only go up – seemingly to infinity and beyond. We have seen this before.

There was no catalyst that we know of that burst the dot-com bubble in March 2000, and we don’t have a particular catalyst in mind here. That said, the top will be the top, and it’s hard to predict when it will happen.”

Is this time different? Most likely not. Such was a point James Montier noted recently,

“Current arguments as to why this time is different are cloaked in the economics of secular stagnation and standard finance workhorses like the equity risk premium model. Whilst these may lend a veneer of respectability to those dangerous words, taking arguments at face value without considering the evidence seems to me, at least, to be a common link with previous bubbles.“

While the ‘bulls’ are adamant, you shouldn’t ‘fight the Fed’ when monetary policy is loose, they say the same when it reverses. Such got evidenced by Fisher Investments arguing rate hikes are NOT bad for stocks.

“Many pundits blaming 2018’s stock market decline on that year’s Fed hikes. While we can’t predict Fed policy from here, we can correct the record on 2018, which we think had very little to do with the Fed.“

Fisher does ‘mental gymnastics’ to suggest the sell-off in 2018 was due to forces other than the Fed. However, what reversed the ‘bullish psychology’ was evident.

“The really extremely accommodative low-interest rates that we needed when the economy was quite weak, we don’t need those anymore. They’re not appropriate anymore. Interest rates are still accommodative, but we’re gradually moving to a place where they will be neutral. We may go past neutral, but we’re a long way from neutral at this point, probably.” – Jerome Powell, Oct 3rd, 2018

That sharp sell-off in the chart above started following that statement from Jerome Powell. Why? Because even though the Fed had already started hiking rates previously, the comment suggested much tighter policy to come.

“Where we are right now is the lower end of neutral. There are implications for that. Monetary policymaking is a forward-looking exercise, and I’m just going to stick with that. There’s real uncertainty about the pace and the destination of further rate increases, and we’re going to be letting incoming data inform our thinking about the appropriate path.” – Jerome Powell, Dec 18th, 2019

By the summer of 2019, the Fed’s interest rates returned to ZERO.

Why did the market rally?

“Rate hikes aren’t inherently bearish, in our view. Like every monetary policy decision, whether they are a net benefit or detriment depends on market and economic conditions at the time, including how they affect the risk of a deep, prolonged, global yield curve inversion. 2018’s rate hikes flattened the yield curve, but they didn’t invert it.” – Fisher Investments

They are. It is just a function of timing between the first rate hike and when something eventually breaks the “bullish psychology.” As :

“In the short term, the economy and the markets (due to the current momentum) can DEFY the laws of financial gravity as interest rates rise. However, as interest rates increase, they act as a “brake” on economic activity. Such is because higher rates NEGATIVELY impact a highly levered economy:”

Fisher is correct that rates may not impact the financial markets in the short term. However, most of the gains got forfeited in every instance as interest rates slowed economic growth, reduced earnings, or created some crisis. 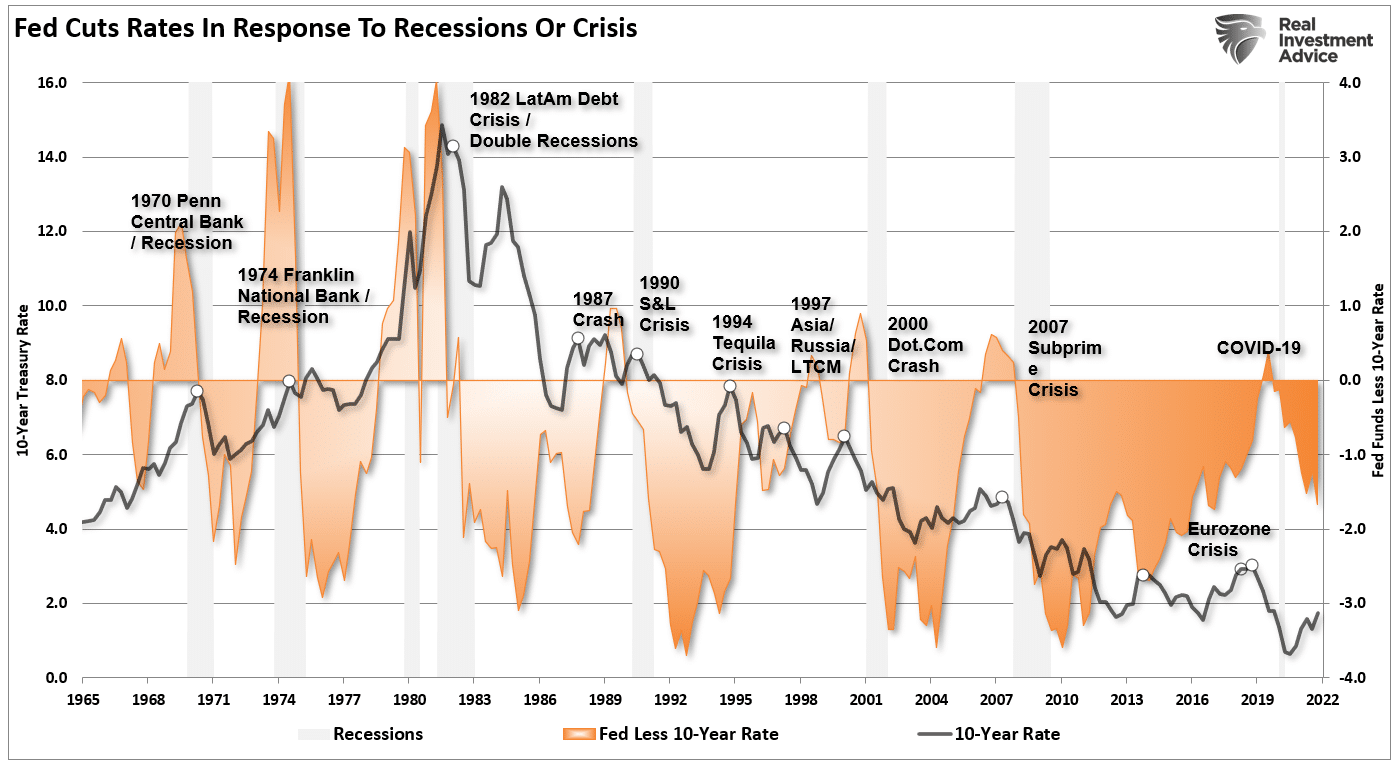 Most importantly, a much higher degree of reversion occurs when the Fed tightens monetary policy during elevated valuations. For example, beginning in 1960, with valuations over 20x earnings, the Fed started a long-term rate-hiking campaign that resulted in three bear markets, two recessions, and a debt crisis. The following three times when the Fed hiked rates with valuations above 20x, outcomes ranged from bear markets to some credit crisis needing bailouts. 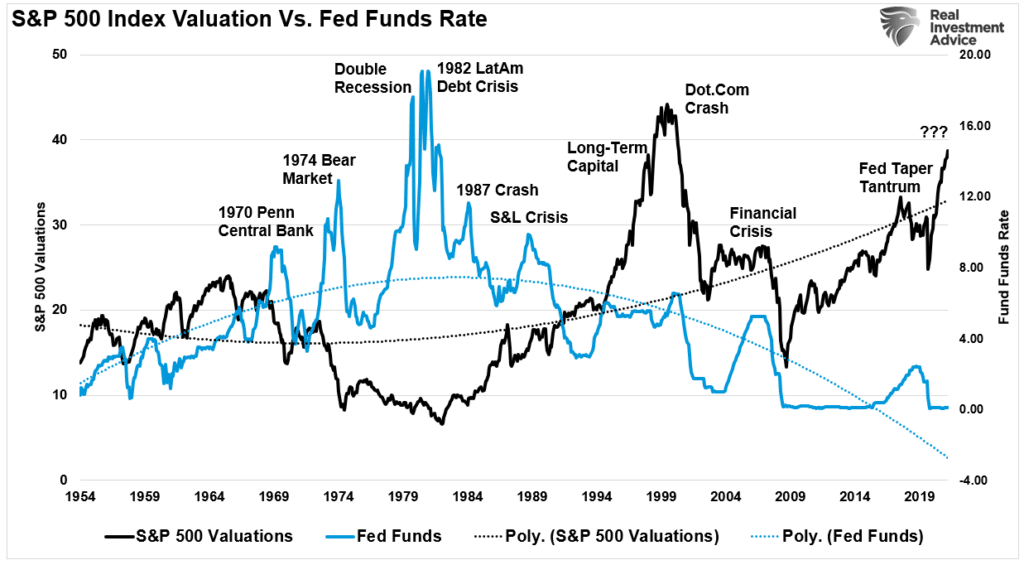 Fed Funds Vs Valuations and Crisis

Yes, rate hikes matter, and they matter more when there are elevated valuations.

‘I Fought The Fed, And The Fed Won’

The primary bullish argument for owning stocks over the last decade is that low-interest rates support high valuations.

The assumption is the present value of future cash flows from equities rises, and subsequently, so should their valuation. Assuming all else is equal, a falling discount rate does suggest a higher valuation. However, as Cliff Asness noted previously, that argument has little validity.

The problem for the bulls is simple:

“You can’t have it both ways.”

As noted, rising interest rates correlate to rising equity prices due to market participants’ “risk-on” psychology. However, that correlation cuts both ways. When rising rates reduce earnings, economic growth, and investor sentiment, the “risk-off” trade (bonds) is where money flows.

With , the market can remain correlated to rising rates for a while longer. However, at some point, rates will matter.

This time will not be different. Only the catalyst, magnitude, and duration will be.

Investors would do well to remember the words of the then-chairman of the Securities and Exchange Commission Arthur Levitt in a 1998 speech entitled “The Numbers Game:”

“While the temptations are great, and the pressures strong, illusions in numbers are only that—ephemeral, and ultimately self-destructive.”

You can fight the Fed, but eventually, the Fed will win.

Dollar Down, Yen Reacts to Bank of Japan Policy Decision By…