A migrant crisis partly of the UK government’s making

Suella Braverman, UK home secretary, was already in trouble last weekend when circumstances on the English coast put her further under fire.

Some 1,500 migrants had taken the perilous journey across the Channel to England in small boats. Some of them were present when an English man threw petrol bombs at a Home Office facility at the port of Dover on Sunday, an incident now being investigated by counter-terrorism officers.

In the wake of the attack, hundreds of people were hurried on to the migrant processing centre at Manston which was already overcrowded, with diseases including diphtheria spreading through the facility.

The events have put a spotlight on the Conservative government’s tough talk on asylum seekers and illegal immigration and weak record in designing policy that meets the stated aim of securing UK borders while keeping migrant numbers and costs down.

Charities and immigration lawyers have said that persistent problems within the asylum system were of the government’s own making, and while some solutions — such as speeding up decision-making on applications — are obvious, they are inconsistent with the government’s hostile approach.

“Ministers have deliberately focused on making the system harsh and austere rather than focusing on putting resources and capacity in place to treat people with compassion and respect,” said Enver Solomon, chief executive of the charity Refugees Council.

Braverman, who is facing serious criticism for allegedly failing to heed legal advice about the prolonged detention of migrants at Manston, described the asylum system as “broken” and illegal immigration as “out of control” when she was defending herself in parliament on Monday.

The Manston facility has a maximum capacity for 1,600 migrants but this week was holding around 4,000 in conditions described by the chief inspector of borders and immigration David Neal as “wretched”.

Some detainees had been held there for more than a month, he said, while a separate prisons inspectorate report, released on Tuesday, exhorted the government to “get a grip” of the situation. The findings described exhausted refugees without beds sleeping on floors with “no fresh air or place to exercise”.

Whitehall officials have accused the home secretary of worsening the situation by deliberately failing to procure alternative accommodation to ease the overcrowding. Braverman has denied the accusations.

But immigration minister Robert Jenrick admitted on Tuesday that asylum seekers were being held at the centre for more than the 24 hours allowed by law, and said that the sheer numbers of people crossing the Channel this year had “overwhelmed” the state’s capacity to respond.

Jenrick predicted that a record 50,000 people would make the Channel crossing in small boats by the year’s end, compared with just 300 in 2018 and nearly twice the numbers for 2021.

“This is a crisis,” he said. “We will, I am afraid, now need to look at some more radical options to ensure that our laws are appropriate, that economic migrants are returned swiftly and that we deter people from coming to the UK,” he said.

Yet, at least part of the problem has been caused by the government’s obsession with designing systems of deterrence to try to break the business model of people smugglers and halt their traffic across the sea, according to charities and lawyers.

Priti Patel, the former home secretary in Boris Johnson’s cabinet, toyed with deploying wave machines and gunboats to push migrants back to the French coast, before alighting on her controversial Rwanda policy.

Her agreement with the government in Kigali is designed to bolster provisions in the new Nationality and Borders Act passed this year making people entering the UK by unofficial means, including by boat across the Channel, inadmissible for asylum claims. 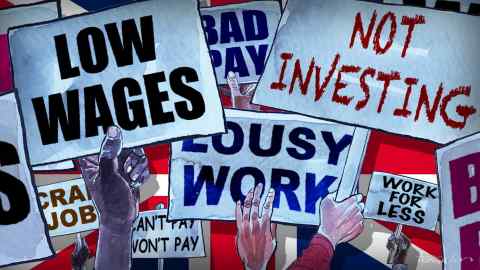 Under the proposal, some asylum seekers landing on the English coast would be sent straight to Rwanda, where in return for an initial payment of £120mn the government agreed to host some of those making claims.

But the policy has been stalled by legal challenges and has contributed to gumming up the immigration system all the way back to Manston, contributing, said charities, to a backlog of asylum application claims that now stands at more than 100,000, according to Home office figures.

Stephen Kinnock, Labour’s shadow immigration minister, accused the government of deliberately stalling the asylum application system, which has been grindingly slow since 2016 as part of its strategy of deterrence.

But, he said, the policy has had the opposite effect because people crossing the Channel know they are unlikely to be turned away due to hold ups in the system. “What we have is the worst of all worlds,” Kinnock said.

Turning applications around faster and dealing more swiftly with those asylum seekers whose claims were not valid by removing them from the country, would in itself be a deterrent, he said.

Colin Yeo, a barrister specialising in immigration law, said ministers should start by tackling the huge backlog in asylum claims. This would also reduce the huge bill the government is paying to provide refugees with hotel accommodation — nearly £7mn a day, the home affairs select committee in parliament heard earlier this month.

“We have got to the point where a radical solution would be just doing their job properly rather than being distracted by pie in the sky cruel schemes,” said Yeo. “There are all sorts of realistic policy levers they could be pulling if they were focused on managing their departments.”

On Tuesday, Number 10 said the home secretary had told the cabinet that “large numbers” of people were being taken from Manston to other accommodation to “relieve pressure”.

But her hardline rhetoric came in for criticism when she portrayed the Channel boat crossings as an “invasion” of England’s coast.

That was “exactly the kind of inflammatory rhetoric that stokes people towards acts of violence like yesterday’s petrol bombing in Dover. Despicable,” retorted Labour MP Bell Ribeiro-Addy.

Jenrick distanced himself from the home secretary’s language but said she had been portraying the scale of the challenge the UK faces.

38% of US voters will consider candidates’ position on crypto in midterms: Survey By Cointelegraph

US stocks lose ground ahead of interest rate decisions

ETH Whales Focus on RPL as Token’s Value Skyrockets By…